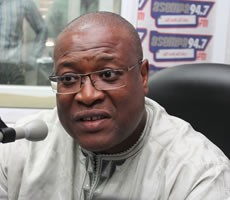 Health officials have been told to desist from putting out figures of the increasing death toll in the recent nationwide outbreak of meningitis.

Health Minister, Alex Segbefia said instead of putting out figures about the death toll, the health officials should concentrate on informing the public on preventive measures in order for them to avoid contracting the disease.

This the Minister believes will reduce fear and panic among the populace, especially residents in the affected regions.

“Please any information about meningitis should be about how you behave, what treatment you should receive and what you should look out for in terms of symptoms.

“Because you are used to dealing with it you know how to handle the information but for many people they don’t know how to deal with that data, it frightens them,” Mr Segbefia said while addressing health officials in the Brong Ahafo Region.

The Minister said the directive is not to deprive the public of information but to ensure that anything put out is done in a “concise and precise manner. We don’t want to create a sensational effect.”

The recent outbreak of meningitis and its variants have claimed 50 lives with about 320 reported cases.

About seven regions have so far recorded either the pneumococcal or meningococcal meningitis.

The number of cases being recorded at various hospitals have increased but the sector minister says a reduction in the death toll is a sign that measures put in place to curb the outbreak is catching on.

Mr Segbefia indicated that an extra â‚µ200,000 has been released to fight the disease.

He also presented extra medical supplies and logistics to the Brong Ahafo regional directorate to shore up their efforts in dealing with the outbreak.

He urged the public to be quick in reporting to the hospital because the disease can be cured only if it is treated on time.

See Also: Video: What you need to know about Pneumococcal Meningitis