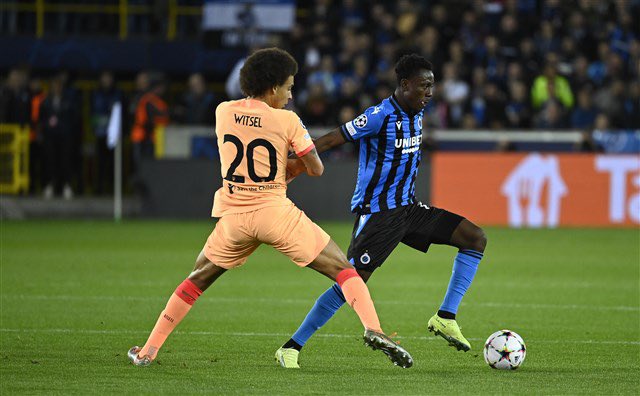 Following some good performances last weekend, the UEFA club competitions gave the platform to Ghanaian players once again in midweek with quite a number of them excelling once again.

Here’s a wrap of the performances of players in action for their respective clubs:

In the Champions League, Kamal Sowah scored in Club Brugge’s 2-0 victory over Atletico Madrid on Tuesday as they moved to the top of the group. The goal was the forward’s second in the competition having scored in the previous game.

In the game between Ajax and Napoli, Mohammed Kudus became the first Ghanaian to score in three consecutive Champions League games despite the 6-1 drubbing of his side. Kudus continues to impress in the 2022/23 season.

Kwabena Owusu excelled as Qarabag FK defeated Olympiacos 3-0 on the road in Greece. Owusu opened the score before Filip Ozobic replaced him in the 90th minute.

In Arsenal’s 3-0 victory over Norwegian side Bodo/Glimt, Thomas Partey played no part.  Eddie Nketiah lasted 82 minutes of action and was credited with a goal.

Inform Freiburg beat FC Nantes 2-0 thanks to a second goal from Daniel-Kofi Kyereh. For the travellers, Dennis Appiah played 78 minutes.

Sheriff Tiraspol fell to Real Sociedad 2-0 at home. In the second half, Mudasiru Salifu and Patrick Kpodo were all inserted into the contest; Razak Abalora, once more, was not included in the matchday roster.

FK Crevna Zvezda crushed Ferencvaros by a score of 4-1 in Belgrade to earn their first victory in the competition. Osman Bukari missed the action due to injury as Ibrahim Mustapha was given a ten minutes cameo.

In Austria, Sturm Graz held SS Lazio to a scoreless tie. Gregory Wuthrich, a Ghanaian-born Swiss defender who entered the game after 70 minutes, played superbly. Mohammed Fusseini was a substitute.

In the Conference League, West Ham United defeated Anderlecht 1-0. Majeed Ashimeru played for 65 minutes before being replaced by Francis Amuzu right before the end of the first half.

Elisha Owusu came on at the beginning of the second half in KAA Gent’s 1-0 loss at home to Djurgaarden.

Ghanaian duo of Emmanuel Yeboah and Adjei Boateng were in action for CFR Cluj as they clinched a 1-0 win over Slavia Prague.

DISCLAIMER: The Views, Comments, Opinions, Contributions and Statements made by Readers and Contributors on this platform do not necessarily represent the views or policy of Multimedia Group Limited.
Tags:
Ghanaian Players Abroad
Lawrence Baidoo