Milovan Rajevac is the best choice for Ghana – Kurt Okraku 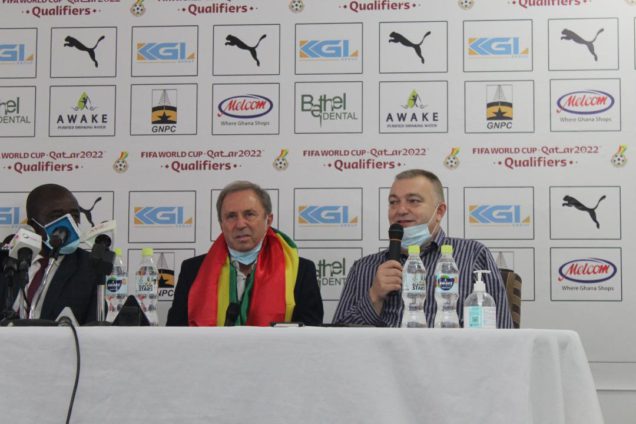 President of the Ghana Football Association (GFA), Kurt Simeon Okraku, says Milovan Rajevac is the best option for Ghana in the quest to qualify for the World Cup once more and also lift the Africa Cup of Nations for the fifth time.

The Serbian coach had been handed a one-year contract in his second coming and would lead the Black Stars’ qualification campaign to 2022 FIFA World Cup as well as next year’s African Cup of Nations in Cameroon.

He would receive a monthly remuneration of $30,000 for the one-year period and a possible extension of his stay if he qualifies Ghana to its fourth World Cup.

Speaking at the new gaffer’s unveiling ceremony at the GFA Secretariat in Accra on Friday, Mr. Okraku explained that every Ghanaian might have a different choice of coach for the Black Stars but must rallied support for the new coach.

“We chose Milovan because he has been the best for Ghana. We are super happy we found our man and very happy he agreed to come even though the terms were not what he expected. But his biggest motivation is that he has unfinished business with the Black Stars.

“With his achievements with Ghana we firmly believe that is not a trial with the Black Stars because he has done it before especially knowing the attitude of Ghanaian football fans.

“We are happy to have a well-experienced coach, someone who knows our mentality and has the respect of our players and controls the dressing room,” he said.

Mr. Okraku added that they have the right technical team in place to support his efforts of taking Ghana football to the apex of world football once again.

“…thus with the likes of Maxwell Konadu, Otto Addo and Richard Kingson behind him and with the support of Ghanaian we hope the team will achieve its target,” he said.

DISCLAIMER: The Views, Comments, Opinions, Contributions and Statements made by Readers and Contributors on this platform do not necessarily represent the views or policy of Multimedia Group Limited.
Tags:
2022 FIFA World Cup
African Cup of Nations
Black Stars
Kurt Okraku
Milovan Rajevac