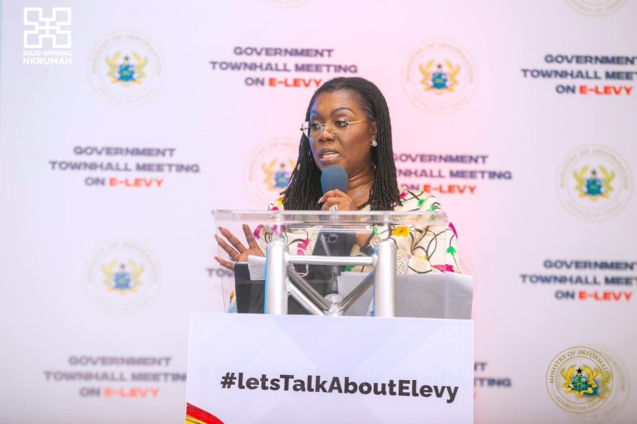 The Minority in Parliament has accused the Communications Minister, Ursula Owusu-Ekuful of evading accountability.

They explained that she has failed to appear before Parliament to answer questions for the third time.

The questions will border on the operationalisation of the e-levy and other issues relating to her Ministry.

The Minister was scheduled to answer 10 questions on Tuesday but her Deputy Minister informed Parliament the answers were not ready and that the Minister will answer them, personally, at a later date.

Minority Chief Whip, Muntaka Mubarak did not take kindly to the response by the Deputy Communications Minister.

The Asawase MP accused the Minister of disrespecting the House.

“There is a deliberate attempt from this Ministry to evade questions. Mr. Speaker, just check the number of times the Ministry has written through a Director, not even the Minister, to this House that questions be rescheduled. Now you are hearing that the answers are not ready. All the answers to the ten questions are not ready?

“I really wish it was the whole Minister [who was in the House] so that I can speak my mind to her…even the annual report from that Ministry and agencies are all delaying,” Muntaka said.

But the Majority Chief Whip, Frank Annoh-Dompreh, appealed to the House to indulge the Communications Minister. He stressed that Mrs. Owusu-Ekuful’s absence is not deliberate.

“I think we should not litigate overly on this matter. You have a genuine concern and I agree with you that the Minister should show deference to this House and the Speakership and the Deputy Minister has stood instead. So I plead that just as she indicated that within the course of the week the Ministry will do the needful…let us give her the benefit of the doubt and I am confident these questions will be answered,” he said.

However, the 2nd Deputy Speaker, Andrew Amoako Asiamah was also not happy about the Minister’s absence.

He directed that if the Minister cannot be available, her deputies can prepare the answers to the questions and provide them to the House.

“Even if the Minister has an emergency, the answers should have been here so that the Deputy Ministers could have taken the responses but she is not here and the answers are also not here,” he lamented.