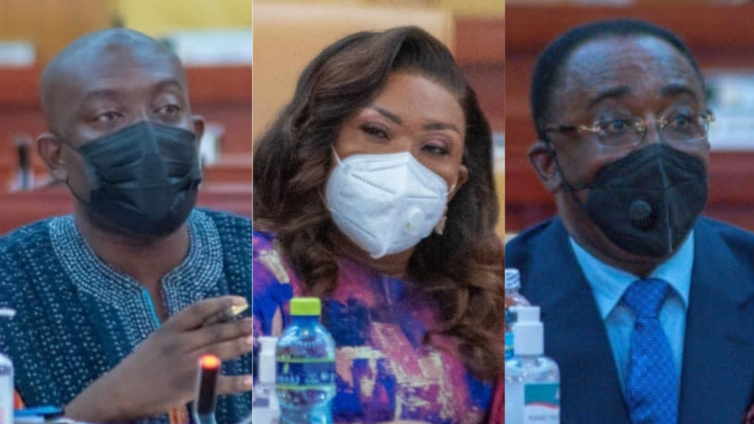 The Minority MPs on the Appointments Committee today voted on the ministerial nominees so far vetted and have unanimously rejected three of the President’s nominees.

Made up of a total of 26 members – 13 each from the NDC and the NPP – the Committee begun the constitutionally mandated vetting process on February 10 and are expected to finish on March 9.

The NDC MPs led by Haruna Iddrisu, a Ranking Member on the Committee, have unanimously decided to reject 3 candidates brought forward by the President out of the 30 candidates so far vetted.

Reasons for the rejection

Mr Oppong Nkrumah who appeared before the Committee on the February 18, was reportedly rejected on three grounds.

The Minority MPs said they were not satisfied with the answers he gave regarding his private businesses.

According to them, the Ofoase Ayeribi MP has an 83% share in a company called Oval MicroFinance. They further state that he failed to admit ethical liability for the related party lending between Oval MicroFinance and West Brownstone, which they say, belong to him.

Also, they say he has dealings with MX24 GH, a content creation, digital agency and media production house located in East Legon, of which he denied any direct association during his vetting.

Overall, the NDC MPs accuse Mr Oppong Nkrumah of being “evasive” and “untruthful” with his answers during his vetting.

Fisheries and Aquaculture Minister-designate, Hawa Koomson, who was vetted on the same day was turned down mainly for the gun-shooting incident that occurred during the registration of voters in her constituency.

During her vetting, the 55-year-old admitted to firing warning shots in self-defence and apologized to the Committee and Ghanaians in general for her conduct.

Although MP for Asawaase, Mubarak Mohammed Muntaka questioned the genuineness of her apology owing to the fact that she had failed to follow up on her constituents who may have been injured or lost their property in the incident, Mrs Koomson stated that she was unaware of any such injuries or losses.

Following the incident last year, the Crime Officer who was in charge of investigating the shooting incident was suspiciously transferred from the Central Region.

According to the Police, the transfer formed part of an ongoing reshuffle in the Ghana Police Service.

So far, no further investigations have been conducted into the matter neither has the MP for Awutu Senya East been either cleared of the incident.

In light of this, the Minority MPs believe that her violent act cannot be sanctioned by a ministerial appointment. They have, therefore, rejected her nomination.

Regarding the Minister-designate for Food and Agriculture, Afriyie Akoto, he is accused of unilaterally cancelling a horticulture contract with the Ghana Ports and Harbours Authority on January 11, 2021 without authority.

This cancellation according to the Minority Group was unauthorised as he was only a caretaker Minister.

Further, the cancellation, they say, will lead to a $50 million judgment debt for the country.

Following the rejection of these candidates, their nomination will be presented to Parliament for a vote.

Considering the current constitution of Parliament with 137 seats a-piece and one independent candidate, the outcome of the vote according to political analysts should be fascinating.

Parliament is expected to resume sitting tomorrow March 2 after a 3-week suspension due to Covid-19.