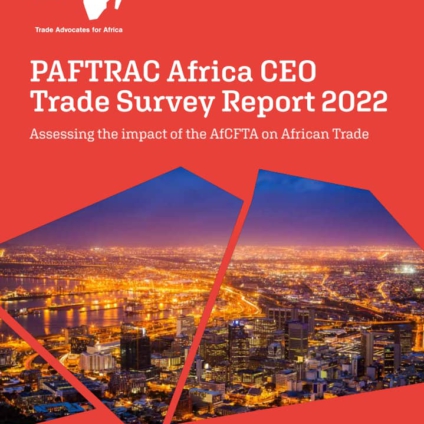 Mistrust has been identified as one of the critical factors that could easily restrict the implementation of continental free trade.

In particular, where businesses on and regulatory changes depend on the political one side of the border and fear increased competition from perhaps more economically developed markets.

It determined the legislative support that each concerned government would need to make changes to the relevant regulations a reality.

One of the more unexpected findings of our survey was that 70% of respondents said that they already export goods or services to other African nations despite all the challenges and the fact that intra-African trade only makes up 16% of all African trade.

“It is even more unexpected given that most of our participants lead Small and Medium-sized Enterprises (SMEs) rather than large corporations,” the report said.

The vast majority, however, export services rather than products inside Africa, highlighting the reality that regulatory and practical barriers obstruct trade in goods.

The latest findings are not surprising to AfCFTA, especially since most of Africa lacks the transportation infrastructure to facilitate trade between its nations.

“Rail and road networks were developed nationally, with far too few cross-border links on which to carry freight. There are often too few customs posts, while many of those that do exist are slow and cumbersome.”

Concerns about restrictions that frequently require the same cargo to be scrutinised at borders and certain nations’ sluggish adoption of digital bills of lading, letters of credit, and other trade documents are also raised in the report.

“Regulatory changes are a matter of political will and administrative competence, but upgrading transport infrastructure requires financing that will be difficult to secure.”

According to the report, half of the exporters surveyed said that their companies still required cash in advance on cross-border deals, although letters of credit are also reasonably popular.

This can be due to a lack of confidence and the difficulties of obtaining hard currency, as many banking networks still forbid the usage of African currencies.

“However, a solution is already on the horizon in the form of Afreximbank’s Pan-African Payment and Settlement System (PAPSS), so it will be interesting to see how quickly traders embrace that.”

Even as early as 2023, the vast majority of African CEOs anticipate positive effects from the AfCFTA on levels of intra-African trade and their businesses, with only four per cent expecting adverse effects.

The AfCFTA markets are anticipated to assist companies in expanding their product and service markets while lowering the expense and red tape associated with exports.

Since the start of trading under the AfCFTA was announced about 18 months ago, African firms are learning more about its potential advantages and difficulties.

The AfCFTA, the most significant free-trade area endeavour in the world, is urgently required, given that businesses of all sizes around the continent are scrambling to find new markets and increase exports.