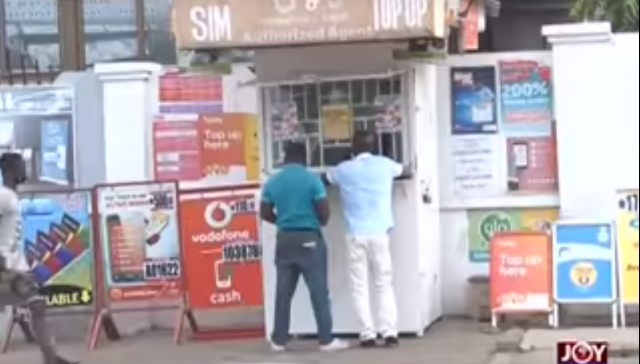 After several reports of attacks on mobile money vendors across the country, many agents still operate under dangerous conditions.

A check through some communities in Accra has revealed several mobile money merchants do not have adequate security systems and instead depend on God for protection.

Robert Boateng has been a victim of mobile money attack, four times. And for security reasons, he would rather stay behind his counter during the interview with JoyBusiness. A story he does not want to recount.

After so many robbery attacks, the best he does these days is to close before the sun goes down.

“It is not safe for me to discuss my new security measures with you. If I do that, am opening up to criminals so all I can say is that, I close every early these days because these attacks mostly took place in the evenings” Mr Boateng told JoyBusiness.

He added that service providers were more concerned about mobile money fraud than the security for merchants.

Juliet Asamoah is another mobile money vendor who operates with no security measures in place.

Operating at kokomlemle in Accra, Juliet does her transactions in a wooden kiosk with just some wire mesh serving as a proof.

Juliet told JoyBusiness, her boss comes for the sales before 6 pm to avoid being attacked.

With no proper security measures in place, Juliet said God is her security guard.

“I have no security man here so in case there is an attack, I will just allow them to take the money and go, but in case they try to harm me, I know the man I serve will never let me down. That man is God”. She said.

Just like Juliet, Belinda Baido believes in a miracle in case of an attack.

She said, “Even though we have CCTV here, I can’t say that will save me when robbers break in, so as for me, I know I have God. Before I come to work every day, I make sure I pray.”

Collins, another mobile money merchant will rather depend on his physical strength in case of an attack on his open space vending station.

“I know sometimes you just have to give these robbers their demand when they attack you, but as for me, if they attack me with weapons I will hesitate because I am a man,” Collins said.

Despite consistent reports of mobile money robbery attacks in recent times, it was clear several merchants continue to operate under perilous conditions.

Available data from the bank of Ghana indicates, there are currently 217, 974 registered mobile money agents as of March 2018.

Despite the growth, security has been an issue of major concern to many operators.

Since the beginning of 2018, about 30 cases of attacks have been reported to the Police with others losing their lives.

Some mobile money users have expressed concerns about the development.

Lawrence Adjei, a mobile money user thinks the closing time of these merchants should be regulated just like the traditional banks since they are equally providing financial service.

But until then, most vendors like Juliet would have no other choice but to keep trusting “omnipresent” God for protection.