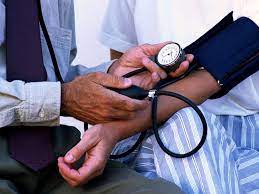 A Research Fellow at the Kintampo Health Research Centre, Dr John Amoah, has disclosed that hypertension prevalence in Ghana is 48 percent, with less than 50 percent of those who know they have the condition seeking medical care.

Also, only 50 percent of persons with hypertension know their condition.

Dr. Amoah, who gave the statistics in an interview with the Ghana News Agency when a team of Journalists with the African Media and Malaria Research Network (AMMREN), toured the Centre, said a research conducted in the Bono East Region proved that the region had 28 percent prevalence of the condition.

Tests run on adolescents in some communities in the region also disclosed that 10 percent of them had hypertension, he said.

Unmodifiable risk factors that contributed to the condition were ageing, and urbanisation, he said.

Globally, he said 1.6 billion people worldwide were hypertensive, which led to cardiovascular diseases and strokes among others, with two-thirds of such people from lower to middle-income countries, according to the World Health Organization.

To control the condition in the Bono East region, Dr Amoah said the KHRC, with the aid of community health officers were visiting community members to check their blood pressure to refer those with anomalies to the nearest facilities for intervention.

The Research Fellow advised the public to desist from taking more than five milligrams of salt a day as well as taking alcohol, sugar, especially toffees, carbonated drinks and other sugary snacks, too much fatty foods, and smoking.

They should rather engage in more physical activities like walking, jogging, skipping, bicycle ridding and working out.

He entreated parents and guardians to ensure that their children during leisure time engaged more in physical activities than watching movies and playing video games.

With research proving that men had high prevalence of hypertension than women, Dr Amoah admonished men to desist from too much alcohol intake and smoking and visit the hospital periodically for checkups.

He also warned the public against stressing themselves, both mentally and physically at work and home, as that could have serious repercussions on their health.

Dr. Charity Binka, the Executive Director at AMMREN, admonished journalists to help the Centre and the Ghana Health Service enlighten the public about hypertension, its causes and effects to reduce the number of cases recorded nationwide and globally.

DISCLAIMER: The Views, Comments, Opinions, Contributions and Statements made by Readers and Contributors on this platform do not necessarily represent the views or policy of Multimedia Group Limited.
Tags:
Hypertension
John Amoah