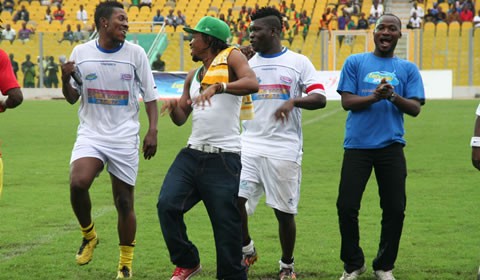 Ghanaian movie, music and media personalities are on a bragging spree ahead of the much anticipated Stars Soccer Fiesta Reloaded, scheduled to come off on June 24.

You may consider it funny by their argument is not that they will not lose to the senior national team, the Blacks Stars, what they are convinced about, however, is that any loss will not be as much as the Crocodiles of Lesotho lost to the Stars in a World Cup qualifier a few weeks ago.

This year’s show is slated for the Baba Yara Stadium in Kumasi and the movie, music and media personalities who make up the Movie, Music and Media Stars are seriously training not to fall prey to the Black Stars.

Some of the celebrities Samini, Amakye Dede, Agya Koo, Abeiku Santana and Chris Attoh were at their best proving that besides the microphones and television screens; they are matchless on the football pitch too.

They will face a strong Black Stars line-up made up Stephen Appiah, Asamoah Gyan, Baffour Gyan, John Pantsil, Sulley Muntari, John Mensah and a host of others.

Contrary to expectations, the movie, music and media personalities are claiming Ghana’s new football sensation Christian Atsu, who featured for them last year, as their team member.

Atsu shot into sudden fame after making an impressive performance with a goal on his debut for the Black Stars’ remarkable thrashing of Lesotho on June 1 in Kumasi.

Christian Atsu will not be the skilled personality to feature for the movie, music and media personalities. Striker Emmanuel Adebayor, Stephan Sessegnon and George Oppong Weah will also be on their starting line-up.

Preceding the main showdown however will be a road show scheduled on the eve of June 24 from Accra through Koforidua to Bunso Junction to Nkawkaw to Kumasi to trumpet and sensitize Ghanaians on the need for peaceful, free and fair elections as the nation prepares to go to the poll this December.