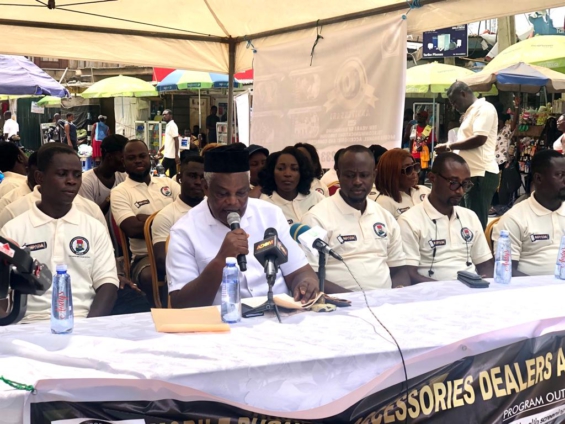 The anniversary is on the theme: ‘Ten years of enhancing telecommunications through mobile phones, accessories and computers”.

Members of the association walked from Kwame Nkrumah Circle through Tip-toe lane with drumming and dancing to set the tone for the celebration.

In the last 10 years, MPADA has chalked a lot of successes including getting government to reduce the 20 percent import tax mobile phones and accessories to 10 percent which has made the purchase and usage of mobile phones, accessories and computers affordable.

Speaking at the launch, Chairman of the Mobile Phones and Accessories Dealers Association, Joseph Osei Agyemang was elated at the feat chalked in 10 years.

According to him, they are contributed their quota to national development by enhancing easy telecommunication with the provision of affordable mobile phones, accessories and computers.

In spite of these feat chalked, Mr. Agyemang said the influx of foreigners in the retail business is a torn in the flesh of Ghanaian mobile phone dealers.

Again, he cited the depreciation of the cedi against the dollar as another challenge affecting the mobile phone industry.

Aside losing capital, Mr. Agyemang said the cedi depreciation has led to high inflation on goods and services making it impossible for members to import.

“Purchase of mobile phones, accessories and computers has gone down drastically making it difficult to even feed our families and loved ones” he bemoaned.

Mr. Agyemang appealed to government to as a matter of urgency implement some austerity measures to save the industry from total collapse.

”MPADA is imploring government to come up with measures to curb these challenges to boost our business to generate more revenue to develop our beloved country” he added.

Activities for the 10th anniversary include: health screening, aerobics and football match, donation to children’s home and a dinner to climax the occasion.

The umbrella body established in 2012 regulates dealers, agents, distributors and all players in the mobile phone industry in Ghana.

DISCLAIMER: The Views, Comments, Opinions, Contributions and Statements made by Readers and Contributors on this platform do not necessarily represent the views or policy of Multimedia Group Limited.
Tags:
10th anniversary
Mobile Phones and Accessories Dealers Association