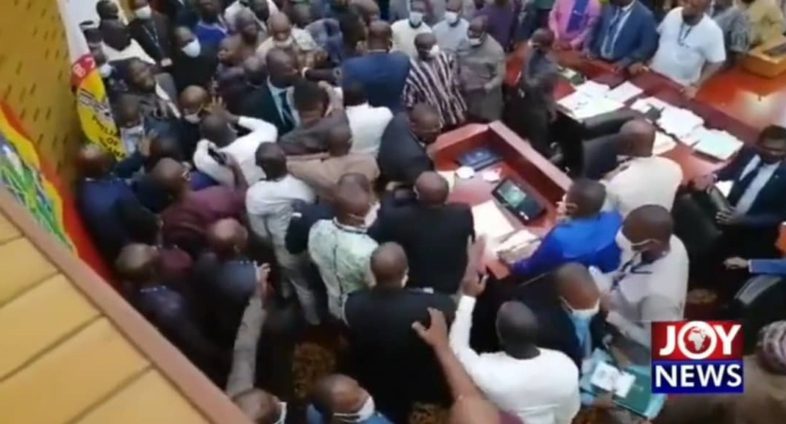 Some Members of Parliament on Monday night were engaged in a fistfight following a disagreement during the voting on government’s E-levy bill.

The fight ensued when the MPs were voting in a headcount to decide whether the E-levy bill should be accepted under a certificate of urgency.

The Minority had attempted to stop the First Deputy Speaker, Joseph Osei Owusu, who was presiding over the House, from leaving his seat and participating in the voting process.

This infuriated the Majority MPs met them at the Speaker’s table to challenge the NDC MPs.

The Minority MPs explained that Mr Osei-Owusu, while in the position of Speaker, does not have a casting vote.

Before the sitting, the Majority had held a press conference stating the whereabouts of the Speaker, Alban Bagbin, was unknown.

However, since the bill had been laid before the House, the First Deputy Speaker took over proceedings in the House.

Scuffle breaks out in Parliament as the First Deputy Speaker, Joe Osei-Owusu vacates the chair for the second deputy speaker to preside, ostensibly so his vote could be counted. #JoyNews pic.twitter.com/aWu82AhSOD

During deliberations, the Minority MPs challenged the decision by the Majority MPs to place the Bill under a certificate of urgency.

Although a voice vote was taken with the First Deputy Speaker ruling favouring the Majority, the NDC MPs called for a headcount instead.

Mr Joseph Osei-Owusu then decided to swap positions with the Second Deputy Speaker, who had voted to take part in the decision making.

In videos captured in the House, the MPs were seen throwing blows, with some falling to the ground.

DISCLAIMER: The Views, Comments, Opinions, Contributions and Statements made by Readers and Contributors on this platform do not necessarily represent the views or policy of Multimedia Group Limited.
Tags:
8th Parliament
Alban Bagnin
Joseph Osei Owusu