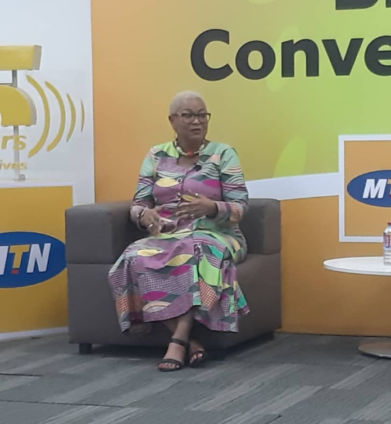 The former Ghana Chamber of Mines CEO, Reverend Dr Joyce Rosalind Aryee, has called for deliberate efforts by Ghanaians to change the national psyche towards nationhood.

She said, “judging from current social media conversations, it is becoming clear that people are falling out of love for the nation.”

The one-time Education and Local Government Minister in the Rawlings administration encouraged the citizens, especially the youth, to develop self-interest and ownership.

She called for a stronger sense of nationalism among persons with dual citizenship to achieve the desired national growth.

“We must move away from demanding solely for our rights without accepting to uphold our responsibilities,” she said and likened the nation to a net, where every strand was intertwined with each other such that any break in a cord could lead to total failure.

Rev. Aryee made the call in Accra on Wednesday when she took her turn on the MTN’s mentorship programme dubbed “Bright Conversations.”

This is part of the activities to mark the company’s 25th Anniversary celebrations.

She said it was unfortunate that most Ghanaians, especially the youth, had over the years lost their sense of service to the nation and now pursue their selfish interests with eagerness to enrich themselves at the slightest opportunity.

The Salt and Light Ministries founder said the youth nowadays don’t care about dishonouring themselves with corrupt practices and downplaying their respective roles to discredit their institutions.

She cited instances where some public servants deliberately delayed and prolonged processes that could take them few hours to complete.

Rev Aryee observed that this is mostly done just to frustrate clients and invite them to pay more for those services, or give bribes for swift action.

She encouraged people to insist on the right things to be done rather than patronising the wrongs.

Sharing her life story in both private and public spheres, Rev. Aryee recounted how she saw every engagement or appointment that came her way as a key opportunity to give her utmost best to society and worked against all odds to achieve perfection in her endeavours.

She said working in the public service should give people a sense of fulfilment because it was a place where all work was done to develop the country.

She explained that politicians and top officials were only appointed by the people to provide leadership and not be hailed as gods who were superior to others.

She advised that rather than eulogising and putting pressure on them to provide things beyond their means and powers, politician and top officials must be closely monitored by the people and held accountable for their work.

“People have become cynical about what public service entails, and we must educate young people to have a positive attitude and changed mindset about this,” she said.

Rev. Aryee admitted that although Ghana was a country of high expectations, the citizens must also accept their responsibility to contribute meaningfully to all that was needed to achieve the expected development.

She said it was only when people realised and valued an opportunity given them as public sector employees to learn to behave rightly.

In her role as the CEO of the Chamber of Mines, she said those times were very challenging yet interesting but admitted that while life revolved around mining, it ought to be done responsibly through effective planning to prevent unhealthy competition with the agricultural sector.

Mining, she said, was still an enclave activity that must be deliberately planned and integrated into these communities to catalyze a business boom, where industries could be established to produce the requisite equipment and commodities needed by the miners, thereby creating additional jobs community members.

Rev Aryee also spoke about the current indiscipline in both the mining sector and within the society as a whole, with lawless attitudes such as illegal mining, indiscriminate littering, selling and shopping on the road, and commercial vehicles stopping and picking passengers anywhere.

She called for the reintroduction of civics into the educational curriculum, encouraged all to serve the nation with humility and love, and encouraged MTN to engage other politicians in telling their stories to encourage the youth.