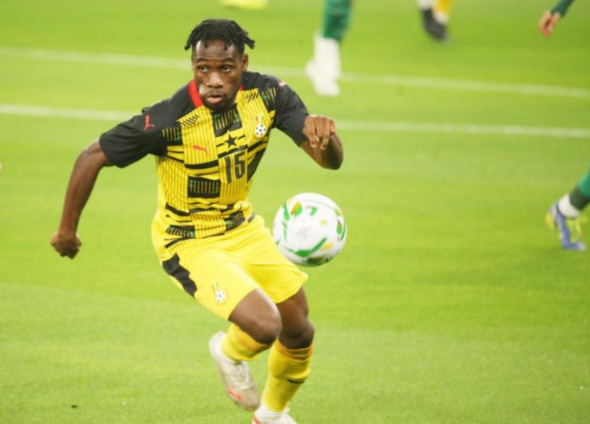 Ghana international, Joseph Paintsil, has revealed his time with the national team started after being watched by former Black Stars head coach, Milovan Rajevac, in a Europa League game.

Since making his debut, the Genk winger has gone on to rack up five appearances for the Black Stars including playing his first competitive tournament during the 2021 Africa Cup of Nations.

The electrifying winger made his debut during the Black Stars during an international friendly against Algeria on January 5, 2022, ahead of the AFCON.

In a yet-to-be-aired interview with new show ‘Star Connect‘ on Joy Prime tonight, Paintsil recounted how the national team journey began for him.

“We played a Europa League game against West Ham [United] and I think he [Milovan Rajevac] was also watching the game,” he said.

“I heard from [my entourage] that the coach watched the game and was really impressed so he would like to call me. Alex [Asante] also called me and told me to send him my passport details…when he calls or texts you, you know it’s for the national team.

“[Milo] scouted me when I played against West Ham and that was how it all started. I just had my first call-up to the national team,” he continued.

Having played for Ghana’s youth teams, the 24-year-old described his first-call up as a dream come true for him and his family.

“I was happy [after my first Black Stars call-up] and it was a dream come true because I’d played for the junior national teams and was waiting for this moment,” he added.

“Although I knew, they also got to know through the television announcements. My sister called me and they were all happy as we spoke.”

Paintsil has had a blistering start to life in the 2022/23 season, scoring six league goals and providing four assists as he hopes to make Ghana’s squad for the FIFA World Cup.

DISCLAIMER: The Views, Comments, Opinions, Contributions and Statements made by Readers and Contributors on this platform do not necessarily represent the views or policy of Multimedia Group Limited.
Tags:
Black Stars
Genk
Joseph Paintsil
Lawrence Baidoo