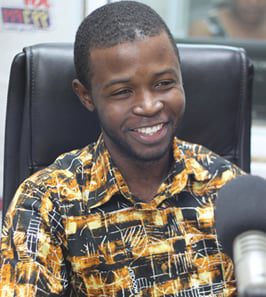 In order for any business to be successful, someone needs to take matters into their own hands. That’s the case of the CEO of Websoft Solutions, BigGodwin Martey.

He revealed on the Super Morning Show on Tuesday that his journey to becoming a successful entrepreneur has not been rosy.

According to the entrepreneur, he encountered various obstacles which were enough grounds to give up his dream, however, the predicament of his family strengthened him to forge ahead and attain higher heights.

Detailing the events of his life, he disclosed that during the early days of his business, he had to commute between Koforidua and Accra on daily basis because he did not have a place to stay in the capital city, a situation which compelled one of his employees to host him in his house.

“It was a very small business at Fadama and I didn’t have a place to stay. So I went to Koforidua every day,” he said.

“Most times it was the last bus that I caught up with because all the buses had left and those buses don’t get full easily. Sometimes it leaves at 12midnight and when you begin to complain, you are told to pay for the empty seats. I had to report to work very early the next day too,” he added.

“I did that for about eight months until my own staff Emmanuel Coffie noticed that I didn’t have a house here. He had a small place in Santa Maria. One day he asked me ‘boss where do you stay?’ I told him I didn’t have a place to stay in Accra then he asked that I joined him where he lived.

“He now convinced me to come and stay with him instead of going to Koforifua and back every day. So my employee became my landlord,” he said.

Recounting other ordeals he went through, BigGodwin Martey revealed that his office was locked for over a month due to debts he owed a bank and the Accra Metropolitan Assembly (A.M.A).

“One day, I woke up and Eunice [an employee] called me to inform me that the office has been locked with another padlock aside from the one we always locked it with. I asked her to check if there’s an inscription on it and she said it’s the name of a bank.

“I immediately understood why they had initiated the move against me and it was because I owed them about GHc600. So I asked her to go home and leave me to resolve the matter. Little did I know that there were more padlocks. The other padlock belonged to the AMA and I owed them too.

Attempts to either retrieve the keys to the padlocks or get the shop opened all proved futile since both the A.M.A and the bank refused to unlock the premises.

Left with no other option, he went home and resorted to prayer. About three days later, an idea came up.

“I had this friend at church who had a tie that matched with the colours of the bank. So I went to him and pleaded with him to lend me the tie. He was as poor as I was but he gave it to me. Monday Morning I wore a white shirt, black trousers, put on the tie and went to the office of the bank.

“I told them that I came to assume work there as a staff because at the time they were short of staff. I was questioned by the security man who asked me to show my staff card. I told him I didn’t have and that the bank had locked up my office and I didn’t have anything doing.

“Moreover, I wasn’t a lazy man so I had come to help for free. The security man refused to grant me access to the bank and it turned into a brawl until the Manager heard about the issue and intervened. So he permitted me to work and I worked for over a month without any pay until the issue went to management and the CEO called me to have conversations about the matter,” he added.

The CEO offered to pay for the cost but I thanked him and declined the offer. I pleaded for time to settle the debt.

Regardless of the obstacles that came his way, Mr Martey challenged himself to go higher.

“Obstacles in my view create new opportunities and I leveraged on them because I couldn’t go back. There was no way I was going to become an employee. It was not going to happen,” he added.

He, thus, used the opportunity to encourage incoming entrepreneurs and the youth at large not to succumb to the obstacles they face on their way to success.

“Young people don’t want to serve. They want the glory. They don’t want a story. You can’t get there that way, especially in our system.  You must sacrifice. You must lay the red carpet, let people walk on you for a while. You need it. It’s your springboard. You just don’t jump into somewhere,” he added.