My government will develop a homegrown policy – Osofo Kyiriabosom 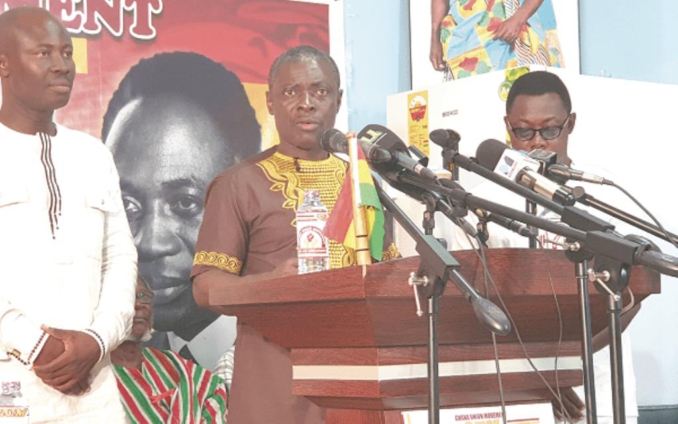 The presidential candidate of the Ghana Union Movement (GUM), Christian Kwabena Andrews says Ghana’s inability to industrialise its agriculture and bolster the manufacturing industry accounted for the nation’s indebtedness.

The aspirant, also known as Osofo Kyiriabosom added that although Ghana’s debt stock surged by GHC16.9 billion in the first quarter of 2020, the country has little to show for it.

He bemoaned out over-reliance on foreign credit to support various sectors of the economy. This, he noted as detrimental to the progress of the nation.

According to him, the two dominating political parties – the New Patriotic Party (NPP) and the National Democratic Congress (NDC) – had both failed to transform a country like Ghana that is endowed with rich natural and human resources.

Although he acknowledged the fact that there have been some attempts such as Akufo-Addo’s flagship One District One Factory, one village one dam, and rearing for food and jobs, he described it as a “failed promise…”

In an interview with the Ghana News Agency in Accra, Political Scientist for GUM, Rev Lenin BK Trotsky, said the NPP and NDC had no excuse for their abysmal failure of the people of Ghana.

In his view, former president John Mahama’s presidential rerun was pointless as he had nothing to offer the people. Rev Trotsky stated emphatically that Mahama’s records showed and that he failed woefully to fix unemployment issues, fight corruption and contributed to putting the nation at great financial risk by borrowing excessively from the International Monetary Fund (IMF).

In respect of the woeful performances of the two dominating political establishments, Rev Trotsky said if the electorate considered them worthy of their votes, the GUM party would use homegrown policies to manage Ghana and provide opportunities for rapid economic takeoff.

The party also condemned the tribal divisions in the nation’s political atmosphere, saying people from different ethnic backgrounds had fought side by side with Osagyefo Dr Kwame Nkrumah for the country’s independence.

In GUM’s mini-manifesto, Osofo Kyiriabosom said the Movement was poised to build a society of people, where tribalism, corruption, nepotism and cronyism would be a thing of the past, stating: “Where there is division, there is strife and evil also thrives…”

He added that the definition of who Ghanaian is had already been provided for in the 1992 Constitution; but a true “Ghanaian is one who is greater in his soul than in his class, creed, political party or the section in which he lives.”

He said: “To be a Ghanaian, a man must have a Ghanaian soul and believe in the spiritual realities upon which Ghana rests and out of which Ghana was born.

“A Ghanaian was created to light mankind with those passions, which lift and not by the passions that separate and debase.

“Ghanaians improve the ideals of man and make them see finer things, causing them to get rid of the things that divide and establish things that unite.”

DISCLAIMER: The Views, Comments, Opinions, Contributions and Statements made by Readers and Contributors on this platform do not necessarily represent the views or policy of Multimedia Group Limited.
Tags:
GUM
Osofo Kyiri Abosom