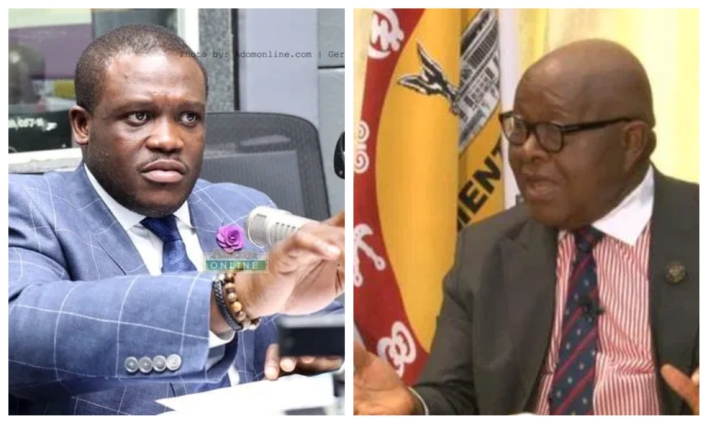 Member of Parliament (MP) for Ningo-Prampram, Sam George, is unenthused by the manner in which he was addressed by the Speaker, Mike Oquaye, following his decision to stay away from proceedings.

The MP had, on March 24, written to the Speaker communicating his absence from the House over threats of Covid-19.

In that letter, Mr George, among other things, explained that the decision was borne out of a conviction that Parliament is “failing to exercise its truly intended role in crisis moments like this. I hold the strongest conviction that we are pandering whilst the flames that may engulf the Republic are being stoked.”

According to him, measures taken towards safeguarding legislators and other workers in Parliament from the novel coronavirus, left much to be desired.

The Ningo Prampram MP added that he will not “to risk exposure to the virus by coming to Parliament every day just to come and work on bills that are of no emergency nature and do not relate to coronavirus or to come and sit and approve loans and tax waivers for private businesses, many of which are foreign.”

Prof Mike Oquaye, after confirming receipt of the letter made some comments which seem to have struck a nerve of the MP.

“I inform you with, with deep regret that I have received a letter, a castigating letter, from Hon. Sam George, MP for Ningo-Prampram Constituency, which says he cannot attend on this House again because sittings of this House are just a waste of his time as the sittings at this time are only to approve loans. This is sad,” Prof Mike Oquaye told the House on April 4, 2020.

In his letter signed April 6, 2020, Sam George believes these assertions have no basis and expressed surprise at the “unfortunate” conclusions drawn by the Speaker of Parliament.

“My respect for you and your office does not erode my right and privilege to disagree with you and speak truth to you when you are wrong. You peddled falsehoods when you made particular reference to me in your closing remarks on Saturday,” Sam George said.

Same George further stated that this move is a “calculated attempt to malign his person by making false claims that you (Speaker) cannot defend to bring my reputation to public opprobrium.”

The Ningo-Prampram MP stands by his earlier position of disinterest at this time for “deliberation of Bills that had no bearing whatsoever on the Covid-19 pandemic and are of no emergency nature.”

“You have blocked Members of Parliament from making statements on the floor of the House related to the coronavirus, you have refused to approve urgent questions to sector Ministers from the House on coronavirus,” Mr George’s letter read, adding that: “the House has sat aloof whilst the liberties of the citizenry have been eroded by a slew of Executive Instruments aimed at extending the overbearing powers of the Executive.”

Sam Georges also explained that he took the opportunity away from Parliamentary sittings to support the district health directorate in his constituency to intensify the fight to contain the spread of the novel coronavirus in the country.

Read the full letter below.