Ghana’s National Cathedral: Even the President might have no clue what he is doing! | Part 1 of 3 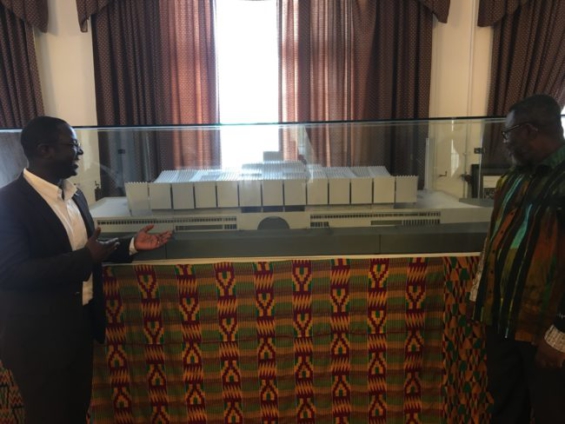 Viewing a model of the cathedral with the Executive Director of the National Cathedral Ghana secretariat a couple of days before the groundbreaking ceremony on 5th March, 2020.

There are seismic spiritual shifts among the nations in nearly every generation which redefine socioeconomic and other key realities. We are in the midst of one right now but few notice it. As they say, “the fish in the water doesn’t see the water.”

The story is told of a delegation from a ‘backward’ African tribe that experienced the delight of their first plane ride en route to Britain. While their English tour guides thought they were making a great impression on these negroid visitors by the imposing size and stature of their financial buildings, civil service infrastructure and entertainment edifices like the Wembley stadium, these visitors’ eyes glossed over; seemingly disinterested. Unbeknownst to their hosts, they were by now really eager to see what they finally verbalized as “the God House.” When they eventually did, Westminster Abbey, I believe, they asked a question none of the Brits could ever have contemplated: “Why is the God House not the biggest building?” For them, the centrality and prominence of faith needed to be expressed in the sheer size of the space allocated it. For others the measure of prominence and centrality might be portrayed in location and to some, the material and financial worth.

Whichever way, the African is arguably ‘incurably religious’ and that centrality of faith must be expressed as such. For the African, and Ghanaian for that matter, spirit takes the first place, for nature, the state, and man are all spiritual (Abraham 1970, 50-51) and the temporal and the non-temporal are fused (52). Some have even gone to the extent of claiming, “The African is a radically religious person, religious at the core of his or her being. Africans’ communal activities and their social institutions are inextricably bound up with the spirit world. […] Africans seem unable to explain life and its mysteries without some reference to the supernatural” (Pobee & Ositelu II 1998, 9).

How we got here

It is not surprising then that like the Thessalonians in the first century when the Ghanaian people also “turned away from idols to serve the living and true God” we have sought to incorporate the God and father of our Lord Jesus Christ in our body politic. In fact, the original text of Philip Gbeho’s peri-independence national anthem (we still use his tune but the lyrics were changed after the first coup d’etat in 1966) were unequivocally to the Lord God of the Christian faith (who other faiths cannot bring themselves to call “father”):

Lord God our Father we pray thee,
Be thou our guide in all our ways,
May we unite together, proclaim the dawn of our new day!
Children of Ghana arise and uphold your cause
And blaze the trail of freedom far and wide,
O God our Father harken to our call
and bring us peace here in our fatherland.

When the president of the Republic of Ghana announced at the dawn of Ghana’s 60th independence anniversary in 2017 that he had plans to put up a national cathedral, “the God House” of the Ghanaian people if you like, I wasn’t excited. Initially. The intellectual in me (if I can claim that) sat on the fence to give this a deep think. When I asked in my August 2018 article, amidst serious brouhaha among the citizenry, whether this was a virtuous or vulgar venture I wasn’t kidding.

I will not repeat my thought processes and content then (you may revisit it here) but since undertaking graduate studies in world Christianity and missional leadership at Fuller Theological Seminary in the USA and at our own Akrofi-Christaller Institute of Theology Mission and Culture in Akropong, Akuapem, I have concurrently taken the time to research the matter and spoken with the real people at the helm and have become convinced that the National Cathedral Ghana venture is Godly, timely and defining in a way that I dare say, tafracher, even the President of the Republic himself who mooted the idea has no clue.

According to His Excellency, President Nana Addo Dankwa Akufo-Addo, his three compelling reasons for this cathedral are  (I’m paraphrasing what I heard him say in my presence at the March 5, 2020 ground-breaking of the national cathedral): first, to thank, praise and honour Almighty God for sparing Ghana major calamity, including civil war and famine  (unlike most of our West African neighbors who we’re no better than) but rather blessing us with peace and relative prosperity; secondly, to galvanize the 71% Christian majority towards united effort in national development and finally to redeem a personal pledge he made to Almighty God that if He helped him win the 2016 election after two unsuccessful attempts he would erect a national cathedral to His honour.

All of these are good, and in my opinion, in that order. But as a missiologist, one who sits at the intersection of gospel, culture, and the church, there is so much more going on in the world of faith and religion that makes the idea and timing of this cathedral so iconic, it cannot be a coincidence and certainly not ignorable.  I seek to therefore elevate this conversation beyond partisan politics and above the utilitarian rhetoric, especially on social media, typically by an elite that are book-smart but may not necessarily be spiritually discerning and tend to be more secular humanist in outlook than they even realize. Of course, I write from a Biblical worldview with an unashamedly Christian bias. Everyone is biased; it’s only worse when one doesn’t know it or wouldn’t acknowledge so.

This is of God, the missionary of God

First of all, it is Almighty God who forms nations (Acts 17:26) and nation states, “people groups who recognize themselves as a coherent community with a political meaning, and are generally larger than tribe or clan” (Lyman Stone). The missionary God forms nations for His three-fold purpose to bring:

The Christian God forms nations for His glory to be displayed in and through them to the extent that even at the end of time, when the new and heavenly Jerusalem is revealed, the nations bring their leaders and glory (from languages to whatever cultural idiosyncrasies) into the city (Revelation 21). What will Ghana(ians) bring?

I am one of those who interpret the name G-H-A-N-A as an acronym for God Has A Nation Ahead. There is so much yet to be actualized in this great land. The National Cathedral Ghana can easily become a Tower of Babel experience if it does not fulfill God’s three-fold mission delineated above. Those people who settled on the plains of Shinar and became Babel (‘a people of confused noise’) sought glory for themselves and not the Most High God (they wanted make a name for ourselves) and did not want to be dispersed to spread God’s glory and be a blessing to the whole earth. The moment our sense of nationalism overtakes God’s global mission and our pride gets in the way of His purposes, you can be sure this project and its people will be scattered and the venture aborted. To the extent that a National Cathedral advances God’s three-fold purpose on earth as it is in Heaven, it is worthy of support. “Is it not written: ‘My house will be called a house of prayer for all nations?’ Jesus asks us like he did the first century Jews. Woe betides us if it becomes ‘a den of robbers.’ The National Cathedral Ghana is a significant missiological statement, in brick and mortar, that the Kingdom of God has more fully come in Africa and from here, Ghana as the geographical centre of the earth, will radiate to all the nations of the earth.

Throughout history, God has moved the centre of his missionary activity: Jerusalem, Antioch, Constantinople, Rome… He has particularly done so when His people lose mission vision. While the East was at the helm in the first 1,000 years after Christ’s ascension, the West led the missio Dei for the next 1,000 years in sheer numbers as well as missionary activity. In this 21st century, everything has changed. Missiologists the world over agree: The centre of gravity of Christianity has shifted from the Global North to the Global South i.e. to Africa, Latin America and Asia. For the first time, the top two continents with the most Christians are Africa and Latin America, breaking a 1,000-year record Europe held. I am in the throes of completing a book on how Africa has transformed from a mission field into a mission force.

The year 2018 was the first year recorded with more Christians in Africa than on any other continent. That is phenomenal, that a continent called ‘dark’ that had barely 9 million Christ followers at the beginning of the 20th Century would now have over 650 million in 2020! The places that have had their historic cathedrals are today slowest in Christian growth but have significantly deep roots. Shall the place leading the world in the Christian faith not have a place to celebrate it, symbolize it, embody it and consolidate it and from there be a launch pad to the rest of the world? I feel privileged to be alive to see a day no one could’ve envisaged a century ago! Let this cathedral stand for the dawning of this new era of African leadership of the global mission of God and symbolize the celebration of this epoch!

Abraham, Willy E. 1970. The Mind of Africa. Chicago: The University of Chicago Press.

This article was first published on www.yawperbi.com. The writer is a Ghanaian physician, Global CEO of The HuD Group, president of International Student Ministries Canada and a Catalyst for the Lausanne Movement. He has graduate education in the area of practical theology that deals with the mandate, message and mission of the Christian church (missiology).