NADMO monies used to deal with debts not disasters

The National Disaster Management Organisation (NADMO) has revealed, debt has shackled its ability to help in times of natural disasters.

The Director-General, Eric Nana Agyemang Prempeh, told Public Accounts Committee of Parliament, he found the organisation to be in È»34m debt. It also has 28 suits to face in court, he added.

NADMO has been recounting its troubles while scores grapple with the ravaging effect of the rainy season beefed up in its ferocity by climate change.

Seven persons lost their lives Sunday after four-hours of rainfall. Of the seven, four bodies were recovered from flood waters at Adjei-Kojo, an Accra suburb.

The deaths come exactly a week after five others died after another Sunday downpour. The fatalities were a woman and her child, two men and one other who was electrocuted.

Last year, Myjoyonline reported about Kpeshie Lagoon, which swallowed the vehicle of Aya Hayfron, a medical doctor who attempted to cross the drain on a rainy Monday evening. She was found dead the next morning.

Rains despite the known seasons of its fall, constantly expose the country’s infrastructure, building culture and waste management.

But adding another layer of exposure, NADMO says monies released from the Finance Ministry are used to pay debts. “As we sit here, we have not been able to buy relief items this year,” he told the MPs. 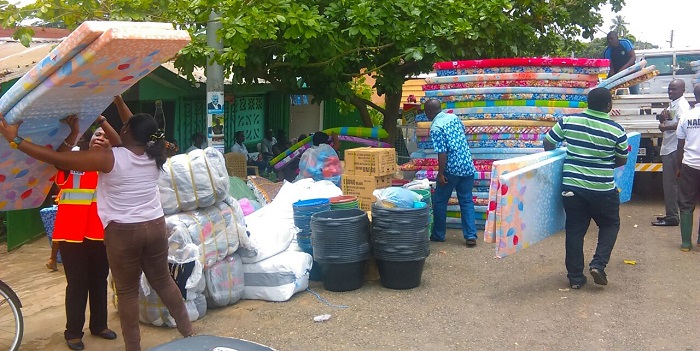 “I am going to work with the Ministry of Finance to see what support we can get for NADMO…in these difficult times,” he assured.