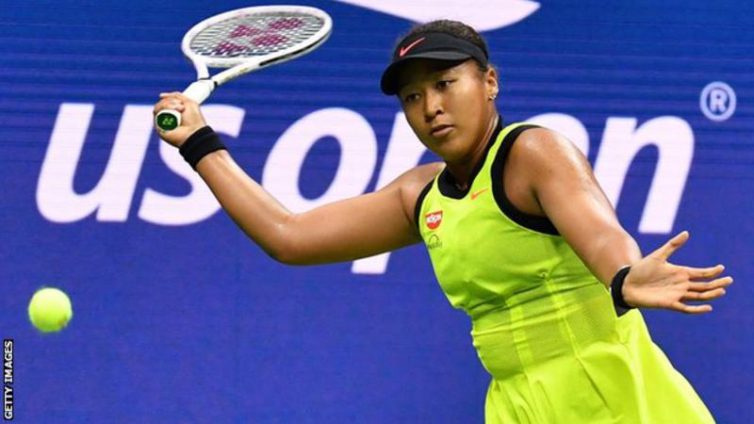 Osaka has won the US Open and Australian Open twice each

Four-time Grand Slam winner Naomi Osaka says she will return to tennis soon after getting the “itch” to play again.

Osaka took a break from tennis earlier this month after her US Open title defence was ended by eventual runner-up Leylah Fernandez in round three.

The 23-year-old Japanese player previously withdrew from this year’s French Open and missed Wimbledon to focus on her mental health.

Adding that her return would be “probably soon”, Osaka said: “I kind of have that itch again.

“It wouldn’t really matter to me if I won or lost, I’d just have the joy of being back on the court.”

In withdrawing from the French Open, Osaka revealed she had “suffered long bouts of depression” since winning her first Grand Slam title at the US Open in 2018.

She returned for the Tokyo Olympics, where she lit the flame at the opening ceremony, but was beaten in the third round.

World number seven Osaka said a series of tough matches had taken their toll on her, culminating in her US Open exit.

“I used to love the competition and just being competitive,” she added.

“If I were to play a long match, the longer it was the more fun it was for me.

“I just started to feel recently the longer it was the more stressed out I became, but I just needed a break to go within myself.”

Osaka’s withdrawal from the French Open followed her decision not to do news conferences at Roland Garros to protect her mental health.

She was fined $15,000 (£10,950) for not doing post-match media after her opening round win and a joint statement from Grand Slam organisers said she could face expulsion should there be a repeat. She then withdrew a day later.

Roger Federer said the relationship between tennis players and the media was in need of improvement.

“Players, the tournaments, journalists, we need to sit down together in a room and go, “OK, what would work for you and what works for us,'” the 20-time Grand Slam winner told GQ.

“We need a revolution. Or at least an evolution of where we are today.

“Even when I am feeling down I know I need to act a certain way in front of the world’s press. We need to remember that tennis players are athletes and professionals, but we are also human too.”

The Swiss, 40, added that tennis needs to do more to help young stars such as Osaka and US Open champion Emma Raducanu, 18, deal with negative comments on social media.

Britain’s Raducanu received criticism for withdrawing from her fourth round match at Wimbledon this year before becoming the first qualifier to win a Grand Slam title earlier this month.

“It’s been amazing, both of their stories,” Federer said.

“But it hurts when you see what happens and when they don’t feel well.

“We do need to help, coach and mentor the younger generation more. I can’t imagine going through the beginning of my career with social media.”

DISCLAIMER: The Views, Comments, Opinions, Contributions and Statements made by Readers and Contributors on this platform do not necessarily represent the views or policy of Multimedia Group Limited.
Tags:
Naomi Osaka
Tennis