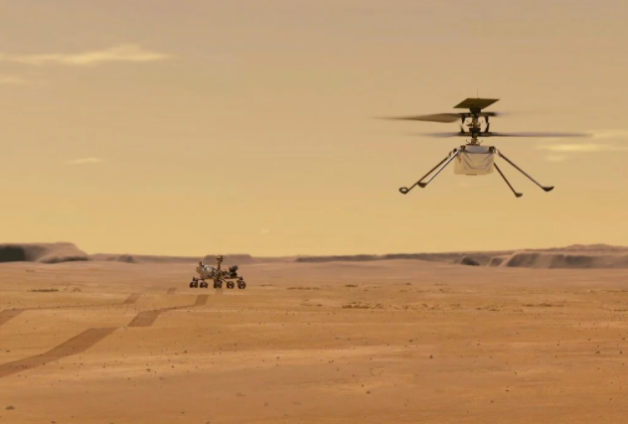 NASA has marked a major milestone in its extraterrestrial exploration program, with the first powered flight of an aircraft on Mars.

The flight occurred very early this morning, and NASA received telemetry confirming that the ‘Ingenuity’ helicopter it sent to Mars with its Perseverance rover.

This is a major achievement, in no small part because the atmosphere is so thin on Mars that creating a rotor-powered craft like Ingenuity that can actually use it to produce lift is a huge challenge.

This first flight of Ingenuity was an autonomous remote flight, with crews on Earth controlling it just by sending commands through at the appropriate times to signal when it should begin and end its 40-second trip through the Martian ‘air.’

While that might seem like a really short trip, it provides immense value in terms of the data collected by the helicopter during the flight. Ingenuity actually has a much more powerful processor on board than even the Perseverance rover itself, and that’s because it intends to gather massive amounts of data about what happens during its flight test so that it can transmit that to the rover, which then leapfrogs the information back to Earth.

As mentioned, this is the first ever flight of a powered vehicle on Mars, so while there’s been lots of modelling and simulation work predicting how it would go, no one knew for sure what would happen before this live test.

Ingenuity has to rotate its rotor at a super-fast 2,500 RPM, for instance, compared to around 400 to 500 RPM for a helicopter on Earth, because of how thin the atmosphere is on Mars, which produced significant technical challenges.

What’s the point of even flying a helicopter on Mars? There are a few important potential applications, but the first is that it sets up future exploration missions, making it possible for NASA to use aerial vehicles for future science on the red planet. It can explore things like caves and peaks that rovers can’t reach, for instance.

Eventually, NASA is also hoping to see if there’s potential for use of aerial vehicles in future human exploration of Mars, too — martian explorers would benefit significantly from being able to use aircraft as well as ground vehicles when we eventually get there.

Now, NASA will work on unpacking the data to glean more insights from the flight, and get back more photos and video of the helicopter during its ascent, hover and landing.

Following this flight, it’ll plan additional flight testing attempts based on remaining power and other parameters now that it knows Ingenuity can fly and did as intended.

DISCLAIMER: The Views, Comments, Opinions, Contributions and Statements made by Readers and Contributors on this platform do not necessarily represent the views or policy of Multimedia Group Limited.
Tags:
Helicopter
NASA