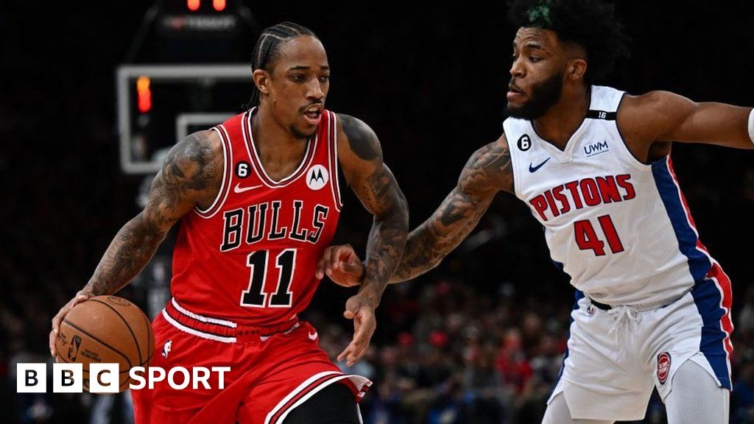 An all-star crowd at the Accor Arena in Paris saw the Chicago Bulls beat the Detroit Pistons 126-108 on Thursday.

The French capital hosted the first NBA game in Europe since 2020 as the Bulls dominated throughout, with Zach LaVine top scoring with 30 points.

DeRozan had missed the previous three games with a quad strain.

Meanwhile, 19-year-old French prodigy Victor Wembanyama, who is expected to be the first pick in this year’s NBA draft, was one of the star attractions watching from the stands.

The 7ft 3in Wembanyama

plays in France for Metropolitans 92 but has been linked with a move to the Pistons.

Their current Frenchman, Killian Hayes, was greeted by a warm reception when the starters were introduced, but it was Chicago who started brightly and took control of the game.

Derrick Jones Jr was one of seven Bulls players to reach double figures as he impressed with some stunning dunks.

Chicago are 10th in the Eastern Conference, while the Pistons are bottom of the 15-team table.

Jayson Tatum scored 34 points as the leaders of the Eastern Conference stretched their winning run to eight games, while the Warriors, who are the defending champions, are ninth in the Western Conference.

It was the Bulls against the Pistons in Paris – but jerseys belonging to all 30 NBA teams could be seen in the crowd. After all, this was a rare chance for a European basketball fan to see the giants of the game up close.

And it was a night for entertainment – as would be expected from a very well-packaged product.

It was impossible to sit still as a DJ placed high in the stands jumped between classic and current hit songs. Then there were the cheerleaders with their polished routines – always encouraging the crowd to make more noise. And any break of play offers lucky fans trying to win prizes with on-court challenges.

There are two main reasons the NBA plays games outside of the US: To attract new fans and equally as importantly to grow the brand. If in the process it inspires a young boy or girl to pick up a basketball – and they happen to become a superstar – well that’s an added bonus that it once again may benefit from.

The Middle East, Far East and Europe frequently hosts pre-season and regular season games to sold-out crowds. In recent years the NBA has also established a league in Africa.

So it’s clear that while having to compete on home soil with American football, baseball and the rising popularity of Major League Soccer, the NBA sees the rest of the world as the way to increase its reach.

DISCLAIMER: The Views, Comments, Opinions, Contributions and Statements made by Readers and Contributors on this platform do not necessarily represent the views or policy of Multimedia Group Limited.
Tags:
Chicago Bulls
Detroit Pistons