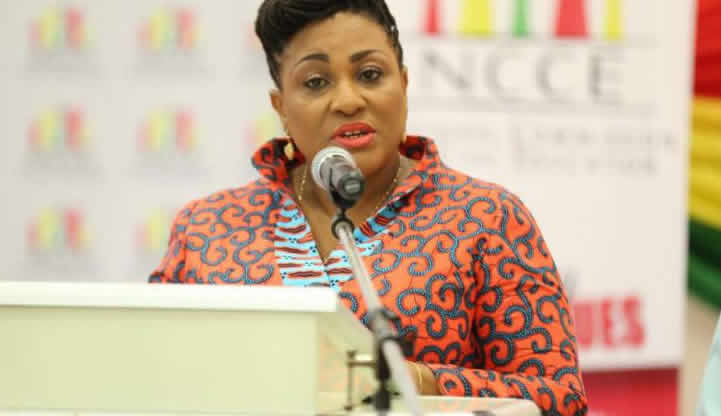 Chairperson of the NCCE, Josephine Nkrumah

A political science lecturer at the University of Ghana has added his voice to government resourcing the National Commission for Civic Education (NCCE) to deliver on its mandate.

Prof Ransford Gyampo, speaking on Prime Morning on Thursday, said the issue of corruption and monetisation of politics can properly be tackled when the Commission is resourced to educate the citizenry.

“We must also continue to sensitise [but] you and I know that since 1992, the National Commission for Civic Education has been deficient in doing some of these things, and the refrain has always been that [they] don’t have money to carry out [their] mandate of civic education.”

The NCCE is a government agency responsible for the education of Ghanaians on civic matters.

The Commission, established by Act 452 of Parliament in 1993, has never been able to perform at its maximum capacity, as it remains one of the most under-resourced state agencies.

The lack of resources to enable the Commission to function properly appears to be a longstanding one.

In 2016, for instance, the NCCE similarly lamented the lack of adequate office space and permanent offices to operate in.

Prof Gyampo commenting on the development, said the political class has not shown the will to adequately fund the NCCE “because corruption and misgovernance thrive in ignorance.”

“When people are not very much knowledgeable about what is going on, then you can govern and govern badly, and nothing will happen.”

“Once the people are sensitised, they will begin to demand accountability and begin to take government on, and that will make government uncomfortable,” he stated unequivocally.

Meanwhile, the NCCE has stressed the need to reinforce the role of political parties as key stakeholders for ensuring peace and security in the country.