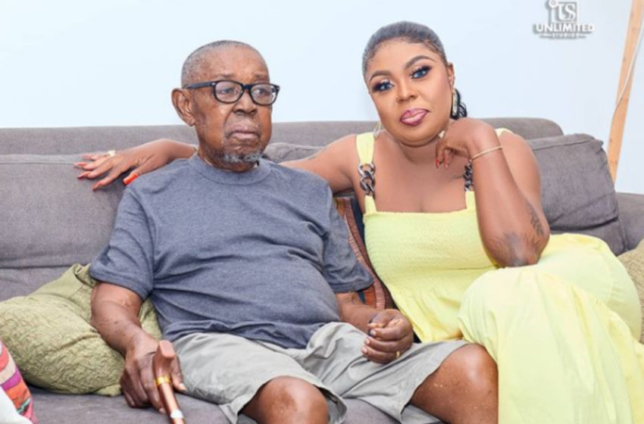 Afia Schwarzenegger and her father

According to her, the man of God made the pronouncement some weeks before her father, Augustine Adjei, passed away.

In a video posted on her Instagram platform, she stated that Prophet Gaisie had urged her to get her father to accept Christ before he died.

Afia Schwarzenegger said Nigel Giasie informed her “in two weeks, your father will die, get someone to lead your father to Christ.”

Following the prophecy, she stated that one Prophet Inkoom came to her home to ensure her father accepted Christ before he passed.

Afia Schwarzenegger thanked both Prophet Inkoom and Nigel Gaisie for their help and the words of encouragement.

She stated that although she does not agree with everything Prophet Gaisie does and says, she is truly grateful to him for what he did for her in the last days of her father.

The actress also thanked some other persons who had an influence on her and her spiritual life as well as those who were able to grace her father’s one-week memorial.

Afia Schwarzenegger lost her father on Jauanry 17, 2022. He passed away after a short illness.

She announced his passing on Instagram. “My hero has gone to be with the Lord. Rest In Peace Daddy. I’m lost,” she wrote.

TV personality, Afia Schwarzenegger could not hold back tears during the event to mark the one week passing of her father on Wednesday, January 26.

The event, in memory of the late Augustine Adjei, was held at De Temple Centre in Achimota