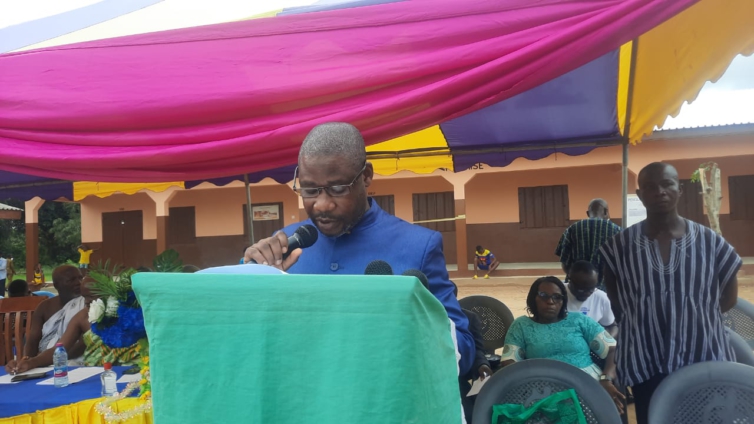 The North Tongu District Assembly has instituted an Educational Scholarship Program which is opened to all brilliant but needy students, especially female students

This, according to the DCE for the area, Osborne Divine Fenu, at the commissioning of a 6 unit classroom block at the Battor Vome Methodist Primary School by the Pencils of Promise, is one of the ways of promoting the girl child education in the district.

Mr Fenu noted that issues with education in the North Tongu District is of great importance to him  and that the assembly is doing all it can to make sure that education is improved in the district.

He noted that when projects are commissioned for use like this, the challenge is mostly their maintenance.

“In order words, the maintenance culture which is lacking among us Ghanaians. Therefore, I am entreating the various stakeholders to take charge of the facility,” Mr Fenu said.

He urged all pupils in the district to at least make reading a habit in order to improve on their reading skills.

“I urge all pupils to make it a point to read at least one-story book per week and surely with the help of our teachers, our children will get educated and their dreams will be fulfilled,” Mr  Fenu said.

He added that he has great plans for the district in regards to education through the help of the Akufo-Addo-led administration and hopes to do everything humanly possible to make sure that it is achieved.

The Paramount Chief of Battor Traditional Area, Torgbe Patamia Dzekle VII, noted with worry that children have on several occasions being seen at wake keeps and funerals instead of studying at home.

Torgbe Patamia noted that the trend is becoming worrying and that if nothing is done about the situation things could go wrong and the lives of the children may be destroyed.

He also noted that lack of parental care and supervision is also a contributing factor to the worrying situation.

“Our children are always seen in wake keeps and funerals instead of reading or resting at home. I am personally worried about the trend and urge parents to take care of their children in order to avoid any unforeseen circumstances,” Torgbe Patamia said.

Parents and teachers expressed gratitude to the organization for the kind gesture and promised to adopt the culture of maintenance.