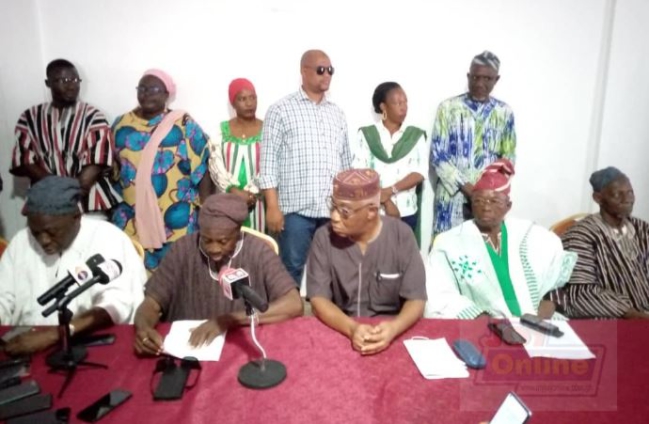 The Council of Elders of the National Democratic Congress (NDC) in the Northern Region has described the attack on the party’s Regional Office as criminal and called on the Police to treat the attack as a crime.

On August 23, 2022, some NDC youth in the Tamale metropolis of the Northern Region vandalised the party’s Regional Office.

Their action was in protest of a decision to let one of the party’s vice chairmen, Mr. Ali Adolf act as Regional Chairman.

The elders said the regional secretariat was built out of individual contributions, therefore for any group of persons claiming to be party faithful to take such a decision to unleash terror on the office is difficult to comprehend.

Addressing the media in Tamale over the recent violent attack on the party’s secretariat, Council Member, Alhaji Umar Yussif said the behavior exhibited by the youth is considered anti-party and highly condemnable.

Alhaji Umar also called on the National Executive Committee to set up a committee to investigate the attacks and enable the appropriate structures of the party, triggering article 48 of the party’s constitution to deal with the situation.

He re-emphasised that anyone found culpable should not be shielded.

“The Regional Council of elders re-emphasised that anybody found culpable in this heinous attack should not be shielded and the lawful processes should be followed to deal with such persons. The Council urges that whoever in the party in the region is dissatisfied with any decision taken at any level should use the complaints and appeals procedures for redress,” the Council elder said.

He said there is the need for party members to seek redress through the appropriate channels instead of using needless violence that is making the party unattractive to the voting public.

Alhaji Umar said the action by the group does not reflect the general feeling of the rank and file of the region.

“The Council wishes to use this opportunity to strongly indicate that the attack was the work of a few individuals and does not reflect the general feelings of the rank and file of the party in the region”.

He called on the youth of the party to exercise maximum restraint and remain calm while further consultations continue to find lasting solutions to the current challenges in the region.

He said the Council endorses the decision by the Functional Executive Committee to settle on Ali Adolf as the Acting Regional Chairman until the party’s next elections.

DISCLAIMER: The Views, Comments, Opinions, Contributions and Statements made by Readers and Contributors on this platform do not necessarily represent the views or policy of Multimedia Group Limited.
Tags:
attack
NDC
Northern region