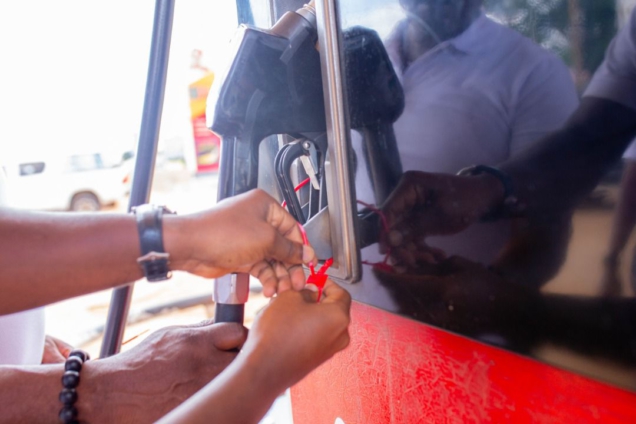 The National Petroleum Authority (NPA) has shut three filling stations for dispensing fuel less than the quantity consumers pay for in Sunyani in the Bono Region.

The stations are; Frimps oil at Penkwase, Goil near Eusbett Hotel and Engen, all in the Sunyani township.

In the case of Frimps, all the seven dispensing units functioning at the time of the visit were underdelivering, whilst, Goil and Engen had two and four of their nozzles underdelivering respectively.

However, the NPA team observed that some of the nozzles at these filling stations were dispensing the petroleum products more than what the consumer had paid for.

The random exercise was undertaken after the team led by Kwadwo Odarno Appiah and Eunice Budu Nyarko, Bono Regional Manager and Consumer Services Manager respectively, sensitised commercial drivers and traders at the Nana Bosoma market, popularly known as Wednesday market in the Sunyani municipal area of the Bono Region.

The Bono Regional Manager emphasised that the Authority will continue to monitor the operations of fuel stations to ensure consumers have value for money.

He said the defaulting fuel stations are going to be sanctioned.

“The Authority will require a report on investigations carried out by the stations as to what caused the anomalies of the nozzles”, he said.

He further cautioned fuel stations to desist from the practice of using ramps and shaking of vehicles when dispensing fuel.

“The NPA will not hesitate to lock temporarily, stations caught using ramps”, he hinted.

DISCLAIMER: The Views, Comments, Opinions, Contributions and Statements made by Readers and Contributors on this platform do not necessarily represent the views or policy of Multimedia Group Limited.
Tags:
Engen
Frimps
GOIL
NPA