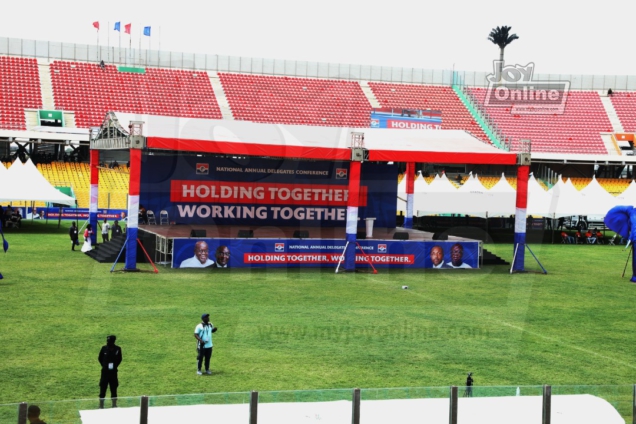 Some supporters of the New Patriotic Party (NPP) who have reported at the venue for the party’s National Delegates Conference are showing signs of frustration over the late start of proceedings.

The Conference was scheduled to kick start at 9:00am at the Accra Sports Stadium on Saturday morning.

However, as of 12noon, the stage on which dignitaries will sit was empty. Indeed, a look around by Myjoyonline.com’s Paa Kwesi Schandorf shows that there is no clear indication as to when the ball will be set rolling.

The situation has subsequently thrown some party supporters into frustration.

Some of the aggrieved faithfuls, who were seen murmuring and lamenting over the delay said the late start of proceedings may not augur well for the smooth running of the day’s activities.

Meanwhile, a section of the supporters have also capitalized on the late start of proceedings to create more publicity for their candidates.

Massing up for lively jama sessions, such supporters were spotted cheering and singing to seemingly while away the time.

Others have also taken the opportunity to fraternize with their colleagues in the party.

Meanwhile, some leading party stalwarts such as Gabby Otchere-Darko and former party General Secretary, Kwabena Agyapong and other leading personalities are already at the Accra Sports Stadium, interacting with other NPP enthusiasts.

Food vendors are also cashing in on the delay to clear their stock.

A variety of local dishes and other beverages are on sale; with some frustrated supporters calming their nerves with these edibles.

DISCLAIMER: The Views, Comments, Opinions, Contributions and Statements made by Readers and Contributors on this platform do not necessarily represent the views or policy of Multimedia Group Limited.
Tags:
NPP
NPP National Delegates Conference
Party supporters