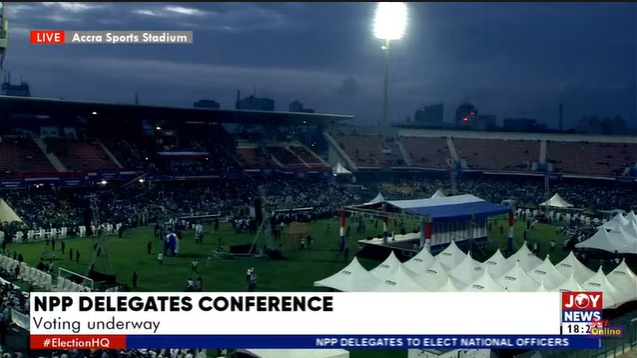 Voting has ended at the National Delegates Conference of the New Patriotic Party and the sorting of ballots is currently underway.

The voting process which commenced about 6:00pm will be followed by the declaration of results.

Earlier, JoyNews reported that delegates were subdivided according to regions to facilitate the voting process.

Ten out of the 45 aspirants will be elected as national executives of the party.

Meanwhile, Tertiary Students Confederacy (TESCON) proxy voters numbering about 291 members have been barred from casting their vote in the 2022 NPP National Delegates Conference.

This is the result of an injunction that was served on them.

This was made known to the delegates on Saturday by the Chairman of the Election Committee of the NPP, Peter Mac Manu.

“Our TESCON delegates and local proxy voters numbering 15 and 291 will not be able to cast their votes because there is an injunction. We received the injunction last night,” he said.