NPP Delegates Conference: We are not leaving anything to chance in winning 2024 election - Freddie Blay - MyJoyOnline.com

NPP Delegates Conference: We are not leaving anything to chance in winning 2024 election – Freddie Blay 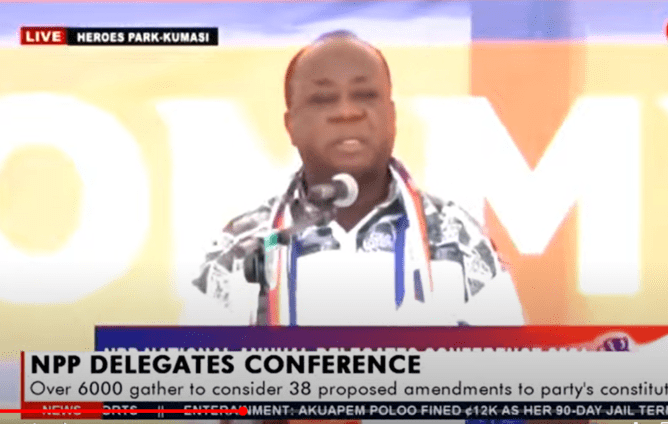 National Chairman of the New Patriotic Party (NPP) Frederick Blay, says they will leave no stone unturned in winning the 2024 elections.

Speaking at the National Delegates Conference of the party in Kumasi on Sunday, he called on its members to gird their loins towards the election and take nothing for granted.

He urged doubting Thomas’ within the party to be resilient against any false claims and deliberate distortions against the party’s effort to win the 2024 elections.

“We need to convince ourselves so that at the end of the four years, it will not be any doubt that the people of this country will vote for us, whoever we present for the 2024 elections. That is why we are determined today to have this conference to consult each other and know what to do and how to go about it,’ he said.

He added that the party can win the 2024 elections, stressing the need for members to work with party members at the lower level to remain in governance in the next four years.

“Make no mistakes, don’t take anything for granted. We are up against a very formidable foe. Naturally, they will resort to nothing, but if we are united, selfless and eschew arrogant, those of us particularly in a position that we have been appointed. If we work with the people, if we keep touch with our base, if we get a party behind us, come 2024, we shall remain in power and raise the level,” he stated.

Over 6000 delegates of the party have gathered today at the Heroes Park of the Baba Yara Stadium in Kumasi to elect a flagbearer for the 2024 elections.

The party is also expected to consider about 38 proposed amendments to its constitution with several issues aimed at helping the NPP to win the 2024 presidential election.

President Nana Akufo-Addo and Vice-President Dr Mahamudu Bawumia, together with their spouses, are present at the conference and the Chief of Staff, Akosua Frema Osei-Opare and other high profile dignitaries.