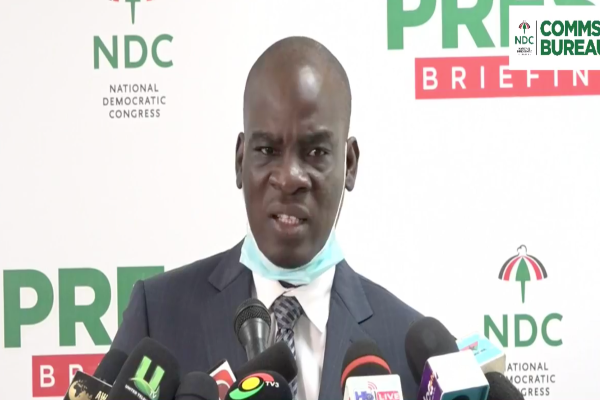 The opposition National Democratic Congress (NDC) has provided explanations as to why the party will not honour the controversial Agyapa Royalties Agreement when voted into power.

Addressing the press in their weekly briefing, Minority Leader of the party, Haruna Iddrisu stated that the Agyapa Royalties Deal was signed in what the party described as “indecent haste”.

Below are some of the reasons he provided to their decision:

Referencing a document signed by the Finance Minister, Ken Ofori-Atta, Mr Iddrisu said the New Patriotic Party (NPP) was impatient in signing the agreement, given that the constitutional provision on which the deal is based was yet to be assented to by President Nana Akufo-Addo.

“This transaction was predicated on a “law” yet to be assented to by the President to become law consistent with constitutional provisions,” he interpreted.

He further explained that as against Article 181(5) of the 1992 Constitution, the ruling NPP has not provided parliament with the terms associated with the deal.

“The decision of the Finance Minister, in our view is in clear violation of article 181(5) of the constitution which requires that side documents, together with the agreements be laid before parliament.

As we speak, we do not have any documentation defining the terms and conditions and the prospectus to guide a decision on this matter,” he said.

The Tamale South MP referred to the deal as “unconscionable”, as in the words of the Attorney General, under the power of article 88 as the principal advisor to government.

This, he explained was because the NDC believes the Agyapa Royalties Deal is against public interest and fails to represent the welfare requirements of the people of Ghana.

The NDC representative expressed wariness towards the incorporation of the offshore entity in Jersey. He maintained that task havens were nontransparent in matters of corporate governance.

“Task havens are susceptible to money laundering and thus elevate the risk of Ghana being listed as a money-laundering jurisdiction, as already observed by the European Union who are attempting to blacklist Ghana come October 1st, as a major money-laundering destination.

The Organisation for Economic Co-operation and Development (OECD) and the United Nations use the evidence of these offshore deals to rate countries on the effectiveness of their anti-money laundering regimes including laws, regulations, policies and other government actions,” he revealed.

The NDC has therefore demanded that the ruling NPP provide the right information and documents to parliament for proper scrutiny.