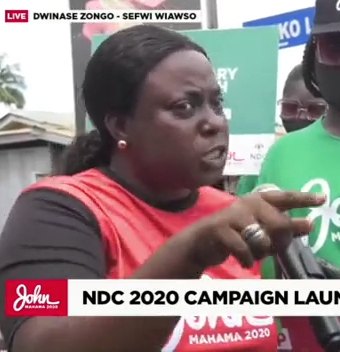 The Deputy National Communications Director for the National Democratic Congress (NDC), has described the New Patriotic Party (NPP) as hypocritical for implementing key policies drawn of the NDC although they claim it’s condemnable.

Obuobia Darko-Opoku said it is ironic how the NPP keeps implementing original NDC policies such as paying depositors of collapsed financial institutions, getting into consultation with the private institutions to add them into the Free SHS among others.

“If the president had much money at his disposal, what kept him so long in paying the depositors, why did he decide to pay them after we put it inside the People’s Manifesto?

“Why is he into consultation with the private institutions to add them into the Free SHS why is he doing all the things that the NDC is promising? he is meeting with Assembly members already thinking about how he is going to pay them too,” she quizzed.

The Deputy National Communications Director said she found it mind-boggling and a challenge to accept the actions of the NPP since according to them, the flagbearer of the NDC, John Dramani Mahama is “Incompetent”.

Speaking at the NDC 2020 campaign official launch at Sefwi Wiawso in the Western North Region, she said the People’s Manifesto is one drafted by the people themselves hence has a high chance of scoring the NDC the highest official seat in Ghana in the upcoming elections.

“This is a manifesto that has ideas, we’ve been in consultation with the electorates themselves, they have told us what will work for them, that is why we have the peoples manifesto,” she said.

For her, she is hopeful that the NDC will win the elections this year.

DISCLAIMER: The Views, Comments, Opinions, Contributions and Statements made by Readers and Contributors on this platform do not necessarily represent the views or policy of Multimedia Group Limited.
Tags:
Election 2020
John Mahama live
NDC and NPP manifestoes
Obuobia Darko-Opoku