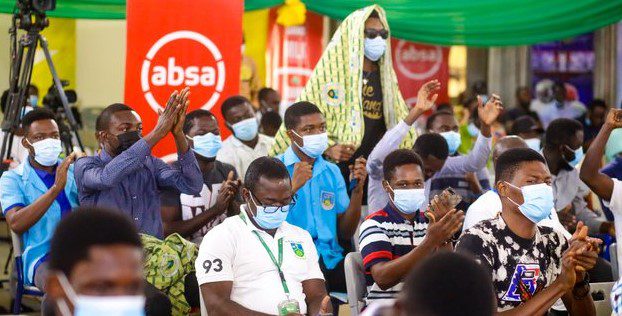 St. Peter’s SHS has progressed to the semi-final stage of the 2021 National Science and Maths Quiz (NSMQ) with a whopping 67 points.

PERSCO started the competition on a solid note as they left no stone unturned in their quarter-final contest against Bolgatanga SHS and Sonrise SHS on Friday, November 19.

The second round which featured the speed race was not very favourable to the three teams as they struggled with most of the questions. However, the Kwahu boys managed to pull out some tricks in the fourth and fifth rounds.

PERSCO went into the contest as the favourites and indeed lived up to expectations as they dominated throughout with a sterling performance.

Their show of mastery in the last two rounds fired them on top of the other two schools. St. Peter’s solved three riddles correctly in Round Five to win the GOIL Riddle Bonanza worth GH¢1,600.

Who wins the first quarter-final contest?

At the end of the contest, Sonrise SHS gained 35 points while the ‘Big Bosses’ stooped low with 20 points. But because the NSMQ has entered the Absa Money Zone, all the participating schools received cash awards per their respective scores.

Other contests coming up

St. Augustine College will feature in another quarterfinal contest with Chemu SHS and Kanton SHS. The last fixture for the first day has reigning champions, Presec-Legon facing Swedru SHS and Techiman SHS.

The quarter-finals continue on Saturday and will end on Sunday, November 21.