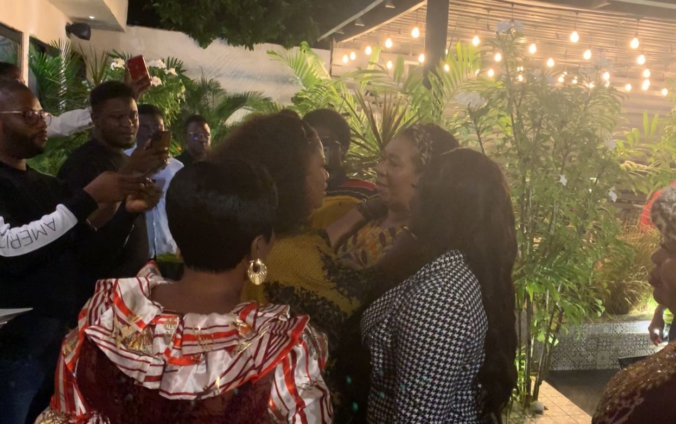 Two of the country’s top gospel musicians who were at loggerheads recently have smoked the peace pipe.

Stella Aba Seal and Obaapa Christy have been spotted hugging out their differences at an event in Accra.

This came days after Obaapa included the veteran in her 20th-anniversary celebration lineup without seeking her approval.

Stella’s manager took to social media to issue a disclaimer stating that they knew nothing about Obaapa Christy’s flyer which indicated her participation in the concert.

Per the statement, the veteran singer had taken a strong exception to the incident and cautioned other event organisers against emulating the same.

Obaapa subsequently apologised on Daybreak Hitz for not informing Stella Seal first before publishing the poster.

However, the latest development occurred at the launch of Abena Serwah Ophelia’s new single ‘Womfa Mma No’ on Tuesday night.

After the event, Obaapa Christy and Stella Aba Seal solidified their reunion.

They were seen in a dialogue in the company of Stacy Amoabeng and some other personalities.

Obaapa was heard telling the veteran musician to forgive her for the miscommunication.

They later hugged it out amid loud cheers from onlookers.

DISCLAIMER: The Views, Comments, Opinions, Contributions and Statements made by Readers and Contributors on this platform do not necessarily represent the views or policy of Multimedia Group Limited.
Tags:
Feud
Obaapa Christy
Stella Aba Seal