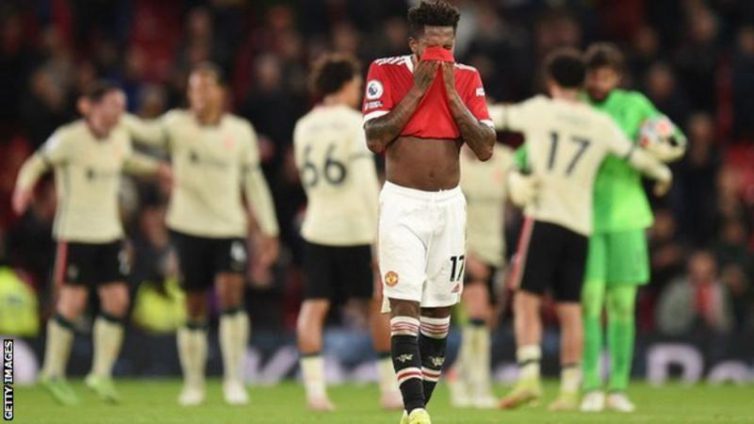 Manchester United boss Ole Gunnar Solskjaer says he has “come too far to give up now” despite overseeing Sunday’s 5-0 thrashing at the hands of Liverpool at Old Trafford.

Solskjaer said the loss is his “darkest day” as a manager but will carry on.

“We know we are rock bottom, we can’t feel any worse than this. Let’s see where we take it,” he told Sky Sports.

Asked how he will pick the players up, he added: “It is going to be a difficult one. The players will be low but there’s loads of characters there.”

The victory was Liverpool’s biggest win at Old Trafford in their history and set a number of unwanted landmarks as far as Manchester United were concerned.

It was their biggest loss in this fixture since October 1895, when Liverpool beat them 7-1 at Anfield, and was the first time they have lost by a margin of five or more goals at Old Trafford without scoring themselves since 1955.

Many Manchester United fans left at half time with the home side 4-0 down.

The home side conceded only once more after the break but also had Paul Pogba sent off just 15 minutes after he had come on as a substitute.

“It is not easy to say something apart from it is the darkest day I have had leading these players,” added Solskjaer, who took over as manager in 2018.

“We were not good enough individually and as a team – you can’t give a team like Liverpool those chances, but unfortunately we did.

“The whole performance was not good enough. We created openings, they had chances and they have been clinical. The third goal decided the game.”

DISCLAIMER: The Views, Comments, Opinions, Contributions and Statements made by Readers and Contributors on this platform do not necessarily represent the views or policy of Multimedia Group Limited.
Tags:
Liverpool
Mamchester United
Ole Gunnar Solskjaer