Oliver Barker-Vormawor: Neho! A letter to rank and file of NDC and NPP (Part 1 of a very long letter) 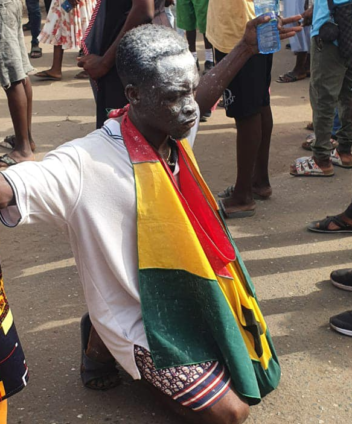 I write to you in the name of what unites us, rather than our divisions.

I write to you knowing that though we are United in our poverty as working-class people, we are divided in our strength by the partisan vehicles you have chosen to place your faith in. Because of this, our conversations haven’t always been fluid and our intentions often doubted.

While you consider the NDC and the NPP as vehicles for your liberation, I fear that political parties quickly become disconnected from their base and often take you for granted. You know this yourself. And that’s your lived reality. Because we believe that no matter the political party a person votes for, they should first vote for themselves when their interests are threatened, our approach is to draw you out of your partisan shells so we can talk about something that threatens our very livelihoods as working-class people.

It is our earnest strategy to ensure that as soon as any Government wins power, we working class must first choose ourselves and need to come together in order to become the official watchdog of the Government. That we should together as comrades sit in perpetual vigilance against tyranny and the abuse of power. The tyranny that is often targeted at us the poor, the economically vulnerable and those of us without political connections or godfathers.

That is how our founding fathers and mothers intended for us the citizens to play our part in our democracy. And it is the only beacon that can guide our democracy to a better Ghana. A new Ghana where citizens are treated with decency and respect. Where Ghanaian lives matter, no matter how poor.

At this time, I have not come to ask you to withdraw your allegiances to the NDC or the NPP; nor do I feel competent to do so.

I have only come so we have a conversation as persons who often get the raw deal. Because even as we elect these people, they are Lords over us and not our servants. And while you and I may cry over the E-Levy, and they may pretend to cry with us, they do so from the comfort of their V8s; with the fuel coupons; Article 71 conditions of service that allow them to fly to Dubai when they have a little fever; and periodic ex-gratia payments calculated in the millions of cedis.

The E-Levy does not know Party card, and so I am hopeful that this conversation concerns us all equally.

Now, pardon my obsession with the E-Levy and refusal to be distracted by a football match yesterday. It’s not because I do not understand that football is the true game of working class people. But since I slept thinking of the E-Levy; dreamt about it And Woke up drafting aspects of our legal challenge against the E-Levy, please permit a fellow comrade a few minutes to bore you from the long rumblings of my insomnia.

In any event, considering that my boisterous opposition to the Evil Levy was the pretext the Emperor’s regime needed to show me where power lies, by locking me up in unlawful detention for 35 days, I think, there is no doubt in anyone’s mind that I strongly detest the Evil Levy and the harm it portends for Ghanaians.

Also, from my association with FixTheCountry, I have come to understand that you, like me, the real people of Ghana strongly reject a tax that will definitely impoverish Ghanaians in a time of economic hardship, worsen social and income inequality by even making the gap between the poor and rich elements of our society wider; and is likely to lead to further loss of jobs directly and indirectly. Your jobs! Your poverty!

If you are wondering why I am writing to you and not to the Government or your leadership, then please know this:

I know that some of what I am going to say maybe hard for some to hear. But I spent 35 days in jail not so that I can be shyer in speaking the truth, but that I may be bolder in my honesty. Those of our leaders from the independence generation, who were jailed like me, also came out and not only led the fight for our independence; but also based on their jailhouse experience, decided to write in our national anthem that what we need as Ghanaians is « fearless honesty ».

Now I have decided not to speak to those who actually voted for that Evil Levy; or to those who who despite having the chance walked out when it mattered most and are now urging us to trust them that they have a plan. A plan that will entail them needing a little help from a Supreme Court which is always eager in its enthusiasm to betray the people.

I have decided to write to you because I want you to ask questions of your leaders. Questions that you haven’t previously sufficiently asked of them. Because if they are your leaders, then surely you are entitled to ask them difficult questions. That’s the essence of a democracy that those who lead you must serve you. Do they?

But first, comrades, because you have allowed partisanship to distract you, and convince you that you are in fact enemies when you are actually poor together, let me address your differences; and also show you how even in those differences you can help individually to defeat the Evil Levy.

First, let me speak to the NDC Rank and File.

These are questions I want you to ask your leaders who serve you.

I understand that not all of you, my fellow comrades are well versed in the law and in Parliamentary procedure. But please ask them these questions and when they provide answers, come back and let’s dissect their answers together.

I know that just because we are poor and disenfranchised, it does not mean that we are not discerning. So please use your discernment and do not swallow everything hook line and sinker.

Let me now turn to my Comrades who are on the Government side.

I know that so many of you were disappointed by what you considered to be the substandard governance of Mahama. You named him incompetent and were annoyed by his decisions to not raise the public debt ceiling even if he was considered a dead goat.

You saw in that insensitivity to your plight. You were annoyed by the propaganda even as your lives became burdened by debts, a failing currency and degenerating power cuts. Your business struggled and your faith in the then President’s ability to guide us through those times plummeted.

You saw in Nana Addo and Bawumia persons who spoke tough and who promised liberation. They sold you the promise land. And promised they knew which path led to economic liberation, not only for themselves but for us all. They promised to arrest corruption; the cedi and the arrogance of power.

There was nothing not to be attracted by. We wanted Ghanaian to become better and for our lives to improve. We wanted a better future for our children and we wanted a clear plan that guarantees that. We were not naive. We did not believe the claim that in 18 months Ghana would look just like Dubai. But atleast we hoped for a project that looked like were on course.

No one can say that you did not have Ghana at heart when you bought that project, as you should.

Just one. How many of them haven’t built 32 Appartements and now own 3 cars? Are you in a better work life?

I only ask for these questions my fellow comrades so that we may unite on the things that threaten our livelihoods irrespective of our parties.

Can we travel together when our lives are at risk and our children’s future uncertain?

I will end the first part of my letter here. Soon I will send the second part.

In the name of the People, for whom we fight.