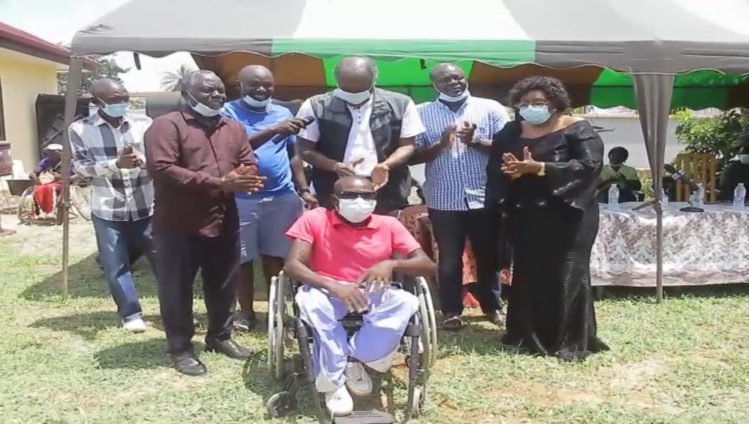 A Non-Governmental Organisation based in Cape Coast, Onuado Foundation, has donated wheelchairs to physically challenged persons in Cape Coast.

The donation follows a request made by the Association of Physically Challenged Persons to help their members who have difficulty moving around as a result of their disability.

Presenting the 25 wheelchairs to the members of the association, former First Deputy Speaker of Parliament, Ebo Barton Oduro, called for support for the needy in society to lessen the burden on such persons.

He indicated there was no useless person in the world, and all that some people require in life is some form of support in order for them to survive the vicissitudes of life.

The former Cape Coast North Legislator indicated that it was only godly that those who have been blessed with resources would reach out to those who are less privileged in society.

He lamented,“We see some of these people who struggle to walk on the street because of their disability. Some go through so much pain under the scorching sun crawling on the ground in order to move before they could get their daily bread. It was only proper and befitting that we pay attention to them, and so our foundation came to their aid.”

He stated that as a Christian, it has been his avowed principle and policy to put smiles on the faces of people he meets on a daily basis.

“Mine is to be able to help anybody who needs assistance from me to get out of any problem of any kind which will be within my means,” he stated.

He was convinced one of the best ways to impact society is to share and care for the needy and prayed for strength to continue with such a mission every year.

“I am only carrying out my godly duties and the rest of it, I leave in the hands of the Almighty Lord. We pray for his strength so we would be able to carry it on from year to year.”

Recipients of the wheelchairs, the physically challenged persons in Cape Coast, expressed their appreciation to the group led by the former First Deputy Speaker of Parliament for always thinking about them and coming to their aid.

President of the people living with disability in the Cape Coast, George Frimpong lamented how road crashes continue to disable people on a daily basis.

“The road traffic crashes statistics are alarming, every year, 14,000 people are made disabled. That’s serious and we need to have a national conversation about such a development,” he said.

The 25-wheelchairs were handed to the physically challenged persons through their association.