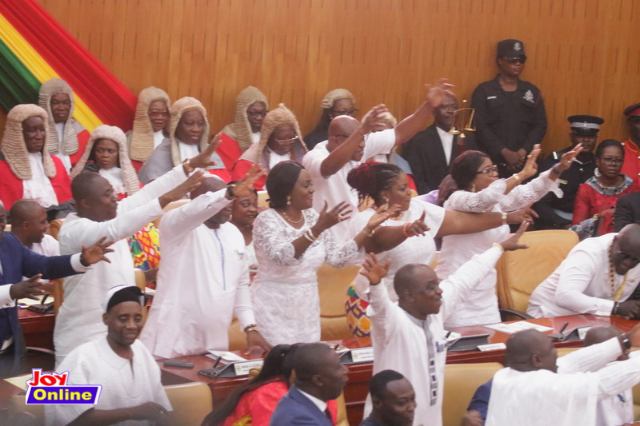 Last week’s State of the Nation Address (SONA) was quite an interesting spectacle. Right after the national anthem, the Minority side, clad in black, decided to walk out on the President who seemed amused by the drama unfolding.

The Minority had been inspired by the penultimate line in the national anthem that says, ‘and help us to resist oppressors’ rule’, which they kept singing again and again.

My minor disappointment with the Minority was that they had not added a dash of red to their sombre dark clothes to show that they were indeed ‘eye red’. Black clothing in our culture denotes mourning, but red headbands or wrist bands lend a splash of colour to the whole affair.

The Majority side, rather than go plead with their colleagues to come back, seemed inspired by the adage that says, ‘the fewer the merrier’ and decided to chant ‘Away! Away!’ as the Minority filed out singing.

I half expected the Majority side to pull out brooms to sweep after the Minority after they had exited the Chamber.

Then the Majority decided to form their own choir and boost the President’s morale by singing, ‘Four for you, Nana four for you…” I am sure the President was chuffed by the melodious tunes.

Some members, led by Mr Kennedy Agyapong, promptly moved to the other side of the House to occupy the empty Minority seats.

I found the theatre most enthralling.

Boycotts and walkouts have long been a recognised and acceptable tool for making political statements in this country. Indeed, in January 1948, Nii Kwabena Bonney III, the Chief of Osu Alata and Oyokohene of Techiman, led a successful boycott of European goods in the then Gold Coast against high prices in the country.

The boycott, which earned him the accolade ‘Boycott Hene’, was a crucial factor in galvanising the nation towards independence, with the February 28, 1948, killings and subsequent riots fuelling the already tense situation.

Per the research I conducted, there have been 22 boycotts/walkouts by both major parties since the beginning of the fourth Republic.

Beyond politics, a boycott threat by the Black Stars of a crucial match during the 2014 World Cup in Brazil led to the desperate airlifting of millions of dollars in cash to Brazil, which became an albatross of embarrassing international proportions around the neck of the Mahama government.

On the international scene, many countries, including Ghana, boycotted South Africa on several levels over its apartheid system in the 1980s, with Ghana and Nigeria leading a boycott of the Commonwealth Games in 1986 in Edinburgh, UK over that country’s close links with apartheid South Africa.

In the USA, the famous 1955 boycott by African-Americans of the city buses in Montgomery, Alabama that was ignited by the Rosa Parks affair was a huge turning point in the civil rights movement.

I, therefore, totally endorse the right to protest through boycotts and walkouts.

We can, of course, have arguments over the reasons for a particular boycott.

My takeaway from this hullabaloo was a statement circulating on social media.

Alhaji A.B.A Fuseini, the MP for Sagnarigu (NDC) famed for his rib-cracking proverbs, was said to have been asked why the Minority did not boycott the Jollof and khebabs that MPs were served with after the SONA.

He is said to have retorted that ‘just because a man has fought with his wife does not mean he should not eat her food’.

If he did indeed make that statement, then Honourable is right, and I believe many married men would heartily agree with him.

DISCLAIMER: The Views, Comments, Opinions, Contributions and Statements made by Readers and Contributors on this platform do not necessarily represent the views or policy of Multimedia Group Limited.
Tags:
State of the Nation Address