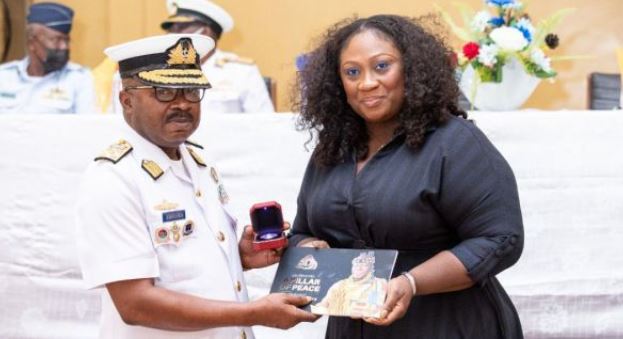 The Ghana Armed Forces (GAF) is inspired by the peace initiatives by the Asantehene, Otumfuo Osei Tutu II, to secure the nation and propel development, the Chief of Defence Staff (CDS), Vice Admiral Seth Amoama has said.

He said the mandate of the Armed Forces, which is to protect the nation, is tied in with the Asantehene’s agenda to use peace to drive development because without security there could not be sustainable development.

The CDS said this when he received the Otumfuo Commemorative Gold Coin at the Burma Camp in Accra on Monday, February 21, 2022.

The impressive ceremony was witnessed by other officers and men of the armed forces. A team from the E ON 3 Group and its partners was at the Burman Camp to do the presentation of the coin.

Vice Admiral Amoama said it was partly due to the work of the Armed Forces that the country had been ranked the most peaceful country in West Africa and the second most peaceful in sub Saharan Africa only after Mauritius.

“The credit goes to the gallant soldiers who provide security to the country,” he said.

Vice Admiral Amoama dedicated the coin to his officers and staff of the Ghana Armed Forces who have worked in various ways to keep the country safe, while also protecting the country’s water bodies and forest resources.

He said he was humbled to be selected as one of the eminent persons of the country to be given the minted 24 carat gold coin, adding that, “I will treasure this coin for life.”

Acknowledging the immense role the Asantehene continues to play in national affairs, the CDS said Otumfuo’s extraordinary skills in conflict resolution had told positively on the peace being enjoyed by the country.

Particularly, he mentioned the role Otumfuo played in resolving the protracted chieftaincy dispute in Dagbon, which restored peace to the ancient traditional area.

Again, Vice Admiral Amoama noted that the progress chalked by the Otumfuo Education Fund was so glaring for one to ignore.

He also stated that the ascendency of His Majesty to the Golden Stool has further enhanced the image of the Asante Kingdom and the chieftaincy institution of the country.

The CDS said the novel commemorative gold coin attested to the dignity and resourcefulness of Otumfuo Osei Tutu.

“It is my fervent hope that His Majesty’s efforts would not only result in the resolution of chieftaincy disputes but also tackle other societal ills like illegal mining,” he said.

Recognising chieftaincy as an important institution in the country, and the colour that Otumfuo had added to the institution, the CDS expressed the hope that the King would continue to spur development across Asanteman and beyond.

Vice Admiral Amoama congratulated the EON 3 Group and its partners for the minting of the coin to celebrate Otumfuo.

Encouraged by the plan by the E ON 3 Group to use the proceeds from the sale of the coin to establish an ultra-modern cultural resource centre in Kumasi to serve as a national heritage, the CDS promised GH¢ 50,000 towards the project.