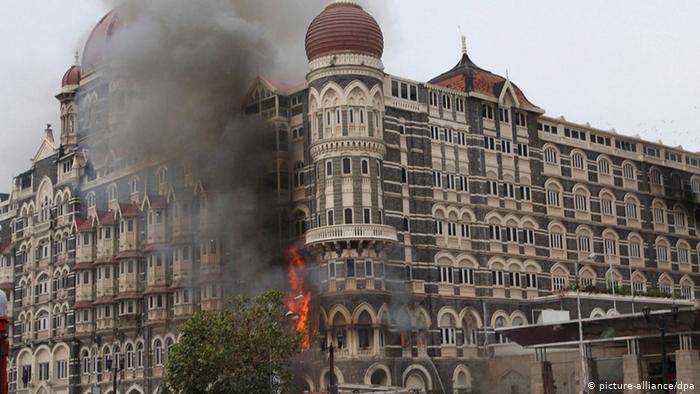 Authorities in Lahore have detained Zakiur Rehman Lakhvi, the alleged leader of a militant group blamed for the 2008 Mumbai terror attacks. Those shootings and bombings led to the deaths of more than 160 civilians.

Pakistan on Saturday arrested an alleged leader of the militant group that orchestrated the 2008 Mumbai terror attacks in India.

An official from Pakistan’s counterterrorism authority, Shakil Ahmed, said that Zakiur Rehman Lakhvi was intercepted in the eastern city of Lahore on charges of financing terrorism.

Lakhvi is the purported leader of the Lashkar-e-Taiba (LeT) jihadist organization that was blamed for the Mumbai attacks, which took place across fours days in November 2008. The militant group is accused of carrying out 12 coordinated shootings and bombings that resulted in the deaths of more than 160 people, with hundreds more wounded.

A front for funding terror

Pakistani authorities accuse Lakhvi of running a dispensary in Lahore as a cover for financing terrorism. Lakhvi was a prominent figure in Hafiz Saeed’s charity Jamaat-ud-Dawa, which is believed to be a front for LeT.

Radical cleric Saeed is a designated terrorist in the United States, where there’s a $10-million (€8.24-million) bounty on his head. He is currently serving multiple jail terms in Pakistan after being convicted in several cases in recent months.

Saeed has denied any involvement in the Mumbai attacks and insists his organization  which runs schools, seminaries, hospitals and ambulance services has no links to terrorism.

The Mumbai attacks increased long-held tensions between India and Pakistan.

The two countries have fought two wars since gaining independence from Britain in 1947 and relations between the pair have been defined by the violent partition of British India which started the Kashmir conflict ever since.

DISCLAIMER: The Views, Comments, Opinions, Contributions and Statements made by Readers and Contributors on this platform do not necessarily represent the views or policy of Multimedia Group Limited.
Tags:
Pakistan
Zakiur Rehman Lakhvi