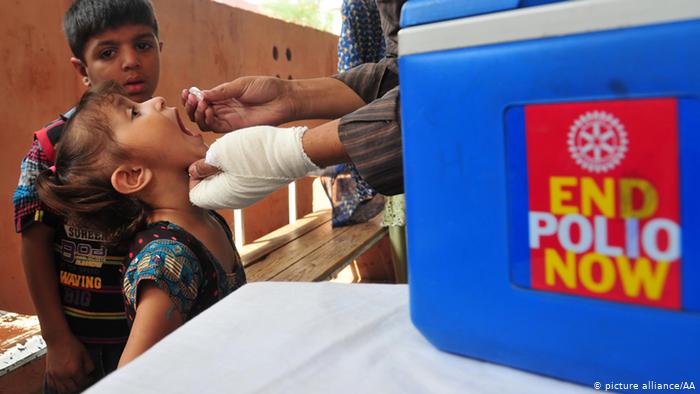 A police officer was shot dead in northwestern Pakistan when gunmen riding a motorcycle opened fire on a polio vaccination team that he was escorting.

Armed gunmen on Tuesday shot dead a police officer guarding a team of polio vaccine handlers in northwestern Pakistan, according to local officials.

The attack took place in Karak, a remote town in Khyber Pakhtunkhwa province, on the second day of a five-day national polio immunization drive. According to official figures, Karak and adjoining areas recorded 15 of province’s 22 cases polio cases last year.

“Two gunmen came on a motorcycle and attacked our colleague Junaid Ullah while he was escorting the polio team. They opened fire on the van carrying polio workers,” Muhammad Ishaq Khan, a police official in Karak, told DW.

“Police teams have launched an operation to catch the attackers. The polio vaccination campaign has been temporarily halted; we will resume it in the area tomorrow,” he added.

The latest polio campaign aims to vaccinate more than 40 million children under the age of five across Pakistan, with the help of around 285,000 frontline workers.

The Taliban claim that polio eradication campaigns are being used by the West as a cover for spying.

They allege that the drives are similar to a hepatitis vaccination program run by the imprisoned Pakistani doctor Shakeel Afridi, who allegedly helped the CIA find al Qaeda’s former chief Osama bin Laden.

Bin Laden was killed by the US Special Forces at his Abbottabad hideout in May, 2011.

“Polio vaccination is considered a foreign drive and a propaganda campaign in these areas of Pakistan,” Rahim ullah Yousafzai, a security analyst, told DW.

Polio is now only found in two countries — Afghanistan and Pakistan — with the latter struggling to cope with a surge in cases over the past few months. The Muslim-majority South Asian country has registered 68 polio cases since the start of the year.

The disease, which mainly affects children under the age of five, can infect the spinal cord, causing paralysis.

Pakistan started its first nationwide polio eradication campaign in 1994. At the time, the country was recording 20,000 polio cases each year on an average.

By 2004, 10 years into the campaign, the number of cases in the country had dropped to only 30 per year. Health experts dubbed it a major achievement.

However, the campaign lost momentum after the September 11, 2001 attacks and the deteriorating security situation in the years following the US invasion of Afghanistan.

The US-led war on terror in the Afghanistan-Pakistan region made it difficult for authorities to focus on polio eradication.

The ongoing coronavirus pandemic has also had an impact on polio vaccination campaigns, with the government’s focus shifting to curb covid-19 in the country.

DISCLAIMER: The Views, Comments, Opinions, Contributions and Statements made by Readers and Contributors on this platform do not necessarily represent the views or policy of Multimedia Group Limited.
Tags:
Gunmen
Junaid Ullah
Pakistan
Police Officer
Polio vaccination