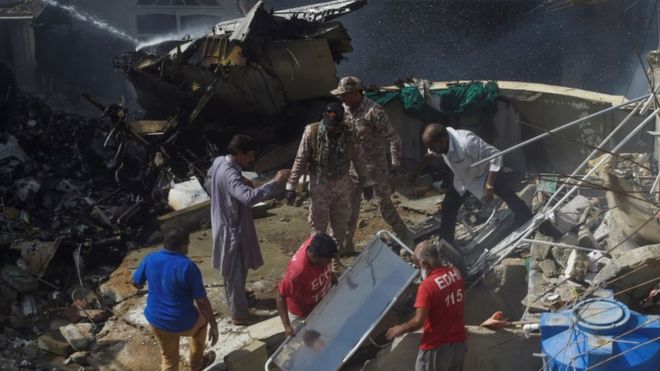 A Pakistan International Airlines plane has crashed in Karachi on a flight from Lahore, aviation officials say.

Flight PK8303, which was carrying around 91 passengers and eight crew, was flying from Lahore to Jinnah International Airport, one of Pakistan’s busiest.

Pictures showed a scene of devastation in the Model Colony residential area.

Emergency services have arrived. There is no confirmation on casualties so far, but many are feared dead.

The plane, an Airbus A320, was about to land when it crashed near Model Colony, a neighbourhood of Karachi about 3.2km (two miles) north-east of Jinnah International Airport.

A spokesman for PIA said the plane had lost contact with air traffic control just after 14:30 local time (09:30 GMT).

Smoke can be seen rising from the crash site.

TV footage showed rescue crew combing through debris strewn across the streets of Model Colony, where several houses have been destroyed.

The chief minister of Sindh, the province where the plane crashed, has declared an emergency in all of Karachi’s hospital.

The cause of the crash is yet to be confirmed. PIA chief executive Air Vice Marshal Arshad Malik said the pilot had told traffic control that the plane was experiencing “technical difficulties”.

Pakistan’s Prime Minister Imran Khan said he was “shocked and saddened” by the crash, promising an immediate investigation.

The crash comes just days after the country began allowing commercial flights to resume after a coronavirus lockdown.

Pakistanis across the country are preparing to celebrate the end of Ramadan, with many travelling back to their homes in cities and villages.

Pakistan has a chequered aviation safety record, including a number of airliner crashes.

In 2010, an aircraft operated by private airline Airblue crashed near Islamabad, killing all 152 people on board – the deadliest air disaster in Pakistani history.

In 2012, a Boeing 737-200 operated by Pakistan’s Bhoja Air crashed in bad weather on its approach to land in Rawalpindi, killing all 121 passengers and six crew.

And in 2016, a Pakistan International Airlines plane burst into flames while travelling from northern Pakistan to Islamabad, killing 47 people.

DISCLAIMER: The Views, Comments, Opinions, Contributions and Statements made by Readers and Contributors on this platform do not necessarily represent the views or policy of Multimedia Group Limited.
Tags:
Jinnah International Airport
Lahore
Pakistan