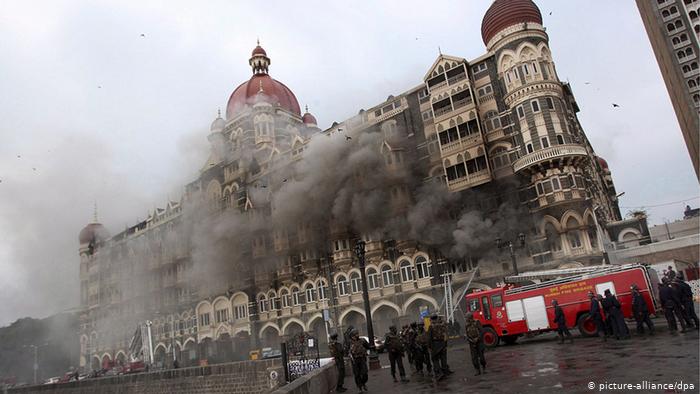 Zakiur Rehman Lakhvi was handed a total of 15 years in prison for terrorism financing. India and the US have long wanted him charged over the 2008 Mumbai attacks that cost 166 lives.

Zakiur Rehman Lakhvi, accused by India and the US of masterminding the 2008 Mumbai attacks, was handed three concurrent 5-year jail terms in Lahore Friday for terror financing, according to court documents.

He was also fined 100,000 rupees (€506, $622) on each count by Lahore judge Ejaz Ahmed, who reportedly drew no connection to the attacks in India’s commercial hub that gripped world media attention 12 years ago.

Lakhvi, arrested in 2008 but later freed on bail, was re-arrested Saturday on what the Counter Terrorism Department (CTD) of Pakistan’s Punjab province described as “charges of terrorism financing.”

The senior figure in the Lashker-e-Taiba (LeT) militant group had used a Lahore dispensary as a front to collect donations, said a court officer.

India has long called on Pakistan to prosecute Lakhvi for the 2008 Mumbai attack, but Islamabad said Delhi had not given it concrete evidence to proceed.

The US State Department, on Twitter, called this week for Lakhvi “be held accountable for his involvement in the Mumbai attacks.”

India asserts that a lone surviving Mumbai attack gunman it executed in 2012 had told interrogators that assailants were in touch with Pakistani-born Lakhvi, said to have been the LeT’s chief of operations.

Another LeT figure, Hafiz Saeed, was sentenced last year by a Pakistani court to five and a half years on two charges of terror financing while denying India’s accusation that he too had been a mastermind of the Mumbai attacks.

The sanctions committee of the United Nations Security Council lists Lakhvi as being involved in militant activity in numerous regions and countries, including Chechnya, Bosnia, Iraq and Afghanistan.

In October, the Financial Action Task Force (FATF), a governmental watchdog entity based in Paris, gave Pakistan until next month to curb terrorism financing or face sanctions.

The news agency ANI cited Srivastava Friday as saying that the timing of the sentencing in Pakistan “clearly suggest the intention of conveying the sense of compliance ahead of the next FATF plenary meeting in February 2021. It has become routine for Pakistan to come up with such farcical actions prior to important meetings.”

FATF is currently headed by Marcus Pleyer, Deputy Director General in Germany’s Federal Ministry of Finance and a former judge.

Relations between Pakistan and India have been strained since the subcontinent gained independence from Britain in 1947. The two nuclear rivals have fought three wars, two of them over Kashmir, which is split between them and claimed by both.