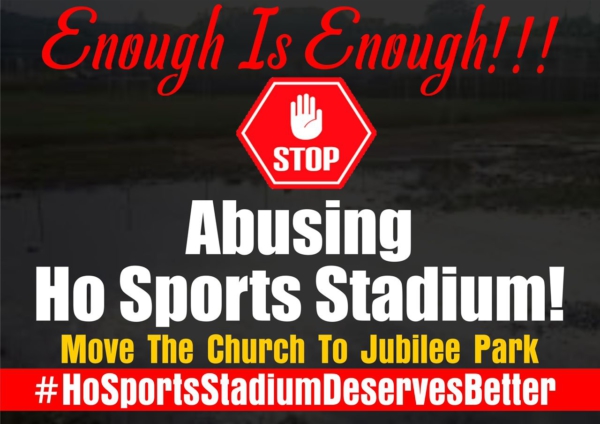 There has been pandemonium over the ‘misuse’ of the only standard sporting facility in the Volta Regional capital of Ho by sports-loving fans.

The fans believe that sports authorities in the Volta Region take delight in giving out the Ho Sports Stadium for outdoor events instead of using it for the core objectives, hosting sporting activities.

The soccer pitch of the facility has become a target for outdoor event organizers including funfairs, jams and crusades by Christian faithful.

The pitch hosted the 5th edition of the Volta Trade and Investment Fair in December 2021 for about two weeks leaving it in a deteriorated state.

This infuriated football fans who called on the Volta Regional Coordinating Council (VRCC) to put the pitch back to shape, and entreated the National Sports Authority to desist from renting the facility to organisers of events that would damage the pitch.

The VRCC responded and promised to fix the pitch, however, that could be mere rhetoric, as no work has been done on the pitch for over a month.

There was an uproar by Ho residents when a match between Ho based Division 2 side, Home Stars and the Black Starlets was called off due to severe flooding of the Ho Sports Stadium, after about 20 minutes of a downpour.

The irate residents stated that the stadium becoming host to various outdoor events, with emphasis on crusades has been the cause of the deteriorating state of the facility.

Nonetheless, the MCE, Divine Bosson, promised to ensure the pitch would no longer host crusades or any outdoor event.

“I directed him to cancel the crusade”, he stated in response to concerns on social media of a Division 2 match being moved to the 66 Artillery Park in Ho.

However, it seems Mr Bosson was made to swallow his words, since he could not honour his promise of ensuring the stadium is only used for sporting activities.

Currently, preparations are ongoing by the Isaac Anto Ministries to host the “Ho For Christ Crusade”, themed ‘Jesus will give you rest’.

Home Stars FC are, therefore, compelled to host Abutia Prestige at the barracks park, which is not in the best of shape.

Thousands of Christians are expected to attend the crusade slated between 16th and 18th March 2022.

According to reports in the local media, the Regional Secretariat of NSA claims to have given out the facility in December 2021 at a fee, hence, could not refund the money ‘since they depend on such funds to run internal affairs‘.

Ho residents have, therefore, engineered a campaign aimed at sending signals to the sports authority to desist from renting out the stadium for events.

They have planned a series of events to send their message across, starting from the evening of Wednesday, 16th March, 2020.

DISCLAIMER: The Views, Comments, Opinions, Contributions and Statements made by Readers and Contributors on this platform do not necessarily represent the views or policy of Multimedia Group Limited.
Tags:
Ho Sports Stadium
National Sports Authority