Parts of Tamale flooded, many displaced 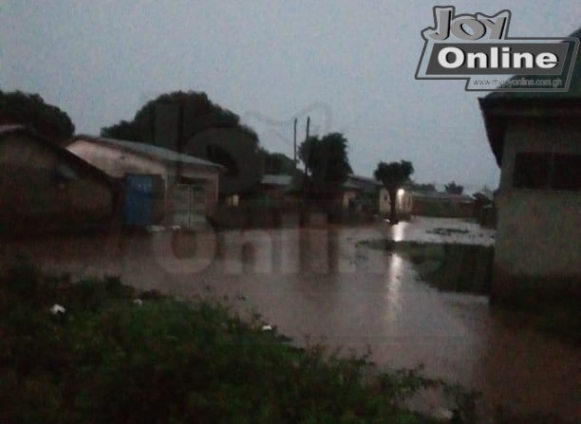 Floodwaters have swept through the Kalariga community in the Tamale Metropolis of the Northern Region displacing several families and destroying properties.

Saturday dawn’s heavy downpour is said to have filled the main drain in the area, thus, overflowed entering homes when families were asleep.

The residents waded at waist level through the floods to safe grounds.

For residents who have experienced the incident before described this year as one of their worst floods in recent times.

Speaking to JoyNews, a resident, Dramani Mariam said she had just moved to the neighborhood and did not know the area was prone to flooding.

Noting that she has been traumatized by the situation, she said, “I became confused and didn’t know which of my three children to move out of the water first.”

She then appealed to the local assembly to do the needful and resolves the drainage system which, to her, is the cause of the flooding.

Unlike Madam Dramani, Victor, another resident was not surprised by the incident since he has experience in years past.

He said he woke up to chaos in the neighbourhoods since everyone was evacuating the place to higher grounds.

According to him, several complaints about the perennial flooding in the area have yielded no result.

“The drains are too small and easily fill to the bream and causes the flooding” he noted.

He also indicated that following a previous flooding incident, the National Disaster Management Organisation (NADMO) has collected data, however, what has become an annual incident is yet to change.

Assemblyman for the Kalariga Dabokpa electoral area, Amudu Yahuza said the drain was dredge some years ago adding that after the dredging the floods stopped until recent times.

Mr Yahuza said several opportunities for road works have been taken to other parts of the electoral area instead of working on the Karariga drain.

But he was optimistic that the assembly will give the area the needed attention to resolve the age long problem.

DISCLAIMER: The Views, Comments, Opinions, Contributions and Statements made by Readers and Contributors on this platform do not necessarily represent the views or policy of Multimedia Group Limited.
Tags:
Flooding
Kalariga
Tamale Metropolis