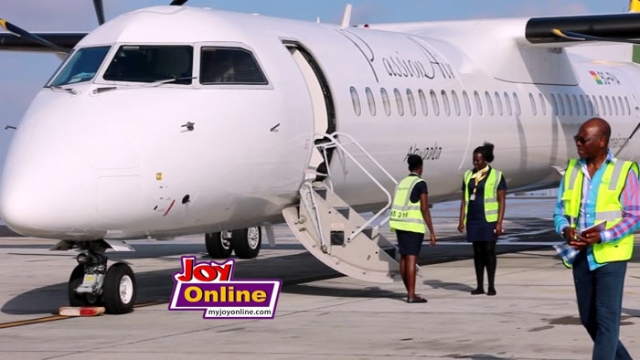 Ghana Airports Company Limited has said there has been an increase in air traffic from 400 passengers to 700 passengers a day since the entry of PassionAir in the domestic flight space.

“I am aware that PassionAir has increased its frequencies on the Kumasi-Accra-Kumasi route from six to ten flights a day and this is very commendable,” he said.

The airline says its new daily route to be catered for by the new aircraft is aimed at expanding options for Ghanaian domestic travellers.

PassionAir operations bring to two the number of airlines operating within the domestic space.

“The arrival of the second aircraft will set the stage for competition on the Tamale route. We appreciate the competition your entry into the market has created and we hope that you will be able to keep this as a competition and not as a commotion so that the travelling public will begin to enjoy and find flying by air attractive,” Mr Attafuah said.

He was hopeful that in a few months, PassionAir will expand its routes to places like Wa and Ho airports. Mr Attafuah says this will enhance the aviation industry in Ghana.

PassionAir’s first aircraft arrived on August 19, 2018, plying Accra-Kumasi route but It has since increased from 42 flights to 62 flights weekly.

"First flight to Tamale we will start on October 2, by offering two daily frequencies from Monday to Saturday and through Sunday,” he said.

Ghana's airline business in 2011 used to have over 700,000 passengers a year but that declined because other airlines were exiting the market. There are currently only two domestic airlines.

Commercial Manager for PassionAir, Anita Adwoa Khoury, said, “we are looking out for all the 200,000 passengers who are no longer flying to come back and start flying”.

Meanwhile, the new domestic airline has hinted that a third Aircraft to ply Accra-Takoradi will arrive by end of October 2018.