Peasant farmers to benefit from 2017 budget 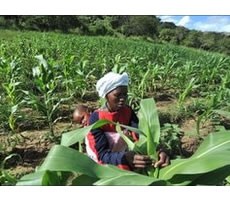 Government says it is working towards providing direct support to the Peasant Farmers Association of Ghana (PFAG) in the 2017 national budget to help boost food supply for domestic consumption and for export.

The assurance was given by the Deputy Minister of Finance Hon.

Ato Forson at the stakeholder consultative meeting on the 2017 Budget statement and Economic policy held in Accra on 19th August 2016.

The association also commended government for yielding to call by the association to include organic fertilizer in the programme for 2016. According to BismarkTettehOwusu who presented the input, the small holder farmers still find it difficult to afford for a 50kg of NPK which is going for Ghc 89.00 and are calling for further increase in the subsidy component and treat the organic fertilizer as a promotional product by making it free due to its benefit to the environment.

On climate change, PFAG is currently teaching farmers on sustainable farming practices and has established agroecology demonstration farm in Kintampo in the BrongAhafo Region which is expected to benefit over 500 farmers in nine districts in the first year.

The association is calling for government support in next year’s budget for capacity building and financial resources to scale up the agroecology project to the other nine regions of the country.

According to the association, the current tractor to farmer ratio stand at one tractor serving one thousand five hundred farmers (1:1500). They appealed to government to expand the current Centers and also allocate at least ten AMSECs to the association to manage so that small scale farmers can have full benefit of the services.

To them, the current arrangement is not small holder farmer friendly as only large scale farmers and business men have access to the AMSECs and charged small holder farmers exorbitant prices before providing the services to them.

On extension services, they stated that since government had lifted embargo on some public sector recruitment, priority should be given to recruiting more extension staff and providing them with the necessary logistics to ensure that agriculture modernization policy becomes a reality.

In his responds, the Deputy Minister of Finance with other officials from the ministry of finance acknowledged the contribution of peasant farmers to the agricultural development of the country. He was particularly happy withkey interventions and recommendations provided by the association in recent for the sector development and promised to consider the demands by the association especially the request for direct support from government.

The he further assured the association that the request for free fertilizer and increase in extension staff was not out of place andit would be given a serious consideration in next year’s budget.