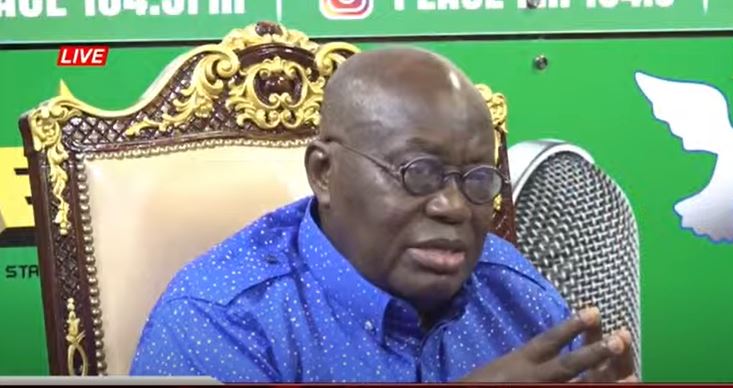 President Nana Akufo-Addo has asked Ghanaians to accept and allow for dissenting views on the discussions on the draft anti-Lesbian, Gay, Bisexual, Transgender, Queer (LGBTQ+) Bill.

He said this in an interview on Accra-based Peace FM on Thursday, as he starts his three-day working tour of the Greater Accra Region.

Speaking on the bill for the first time since it was introduced to Parliament, the President noted that tolerating and recognising opposing views on the bill will improve the country’s democracy.

“What I will hope for is that the debate would be civil and that we will recognise the need for us to be tolerant with each other and with opposing views,” he stated.

The ‘Promotion of Proper Human Sexual Rights and Ghanaian Family Values Bill 2021’ was submitted to Parliament in June this year.

If passed into law, it would criminalise LGBTQ+ activities and its advocates and jail offenders.

Since its introduction, the bill had generated a public debate from different groups, including academia, clergy and civil society organisations.

While many religious institutions and some MPs are advocating for the bill to be passed into law, other campaigners are against the bill indicating that it will infringe on the human rights of people in the LGBTQ+ community and subject them to abuse and violence.

The President told the host, Kwami Sefa-Kayi that he was impressed with the ongoing expression of different ideas on the anti-homosexuality bill.

He added that he is not pressured by the current debate on the bill and believes that the parliamentary committee on constitutional, legal and parliamentary affairs would carefully consider the 130 memoranda submitted before it and come to some consensus.

He explained that all that was happening was to ensure that the process is conducted in a respectable manner.