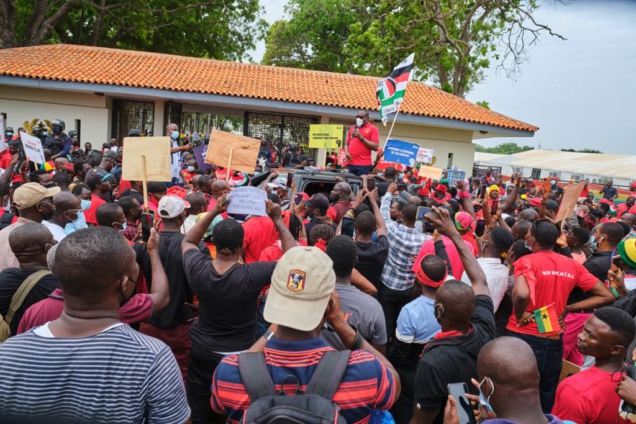 On Tuesday, hundreds of supporters of the opposition National Democratic Congress (NDC) hit the streets of Accra to protest how the country is being governed under President Nana Addo Dankwa Akufo-Addo.

The demonstration organised by the NDC National Youth wing started from the Accra Mall area at Tetteh Quarshie interchange to the seat of the president, the Jubilee House and Parliament House.

Clad in red and black, some of them had placards with various messages including, “Ghanaian lives matter”, “Ahmed Suale deserved to live”, “Akufo-Addo, you are a dictator”, “No justice for the dead”, “Kum Yen Preko”, “We feel your silence Akufo-Addo and Bawumia”, “no peace, #WeAreAllKaaka”, among others.

They presented petitions to the President and the Speaker of Parliament making a number of demands including telling government to protect Ghanaians against military brutality.

Below are pictures from the demonstration taken by photojournalist, Sammy Moore: