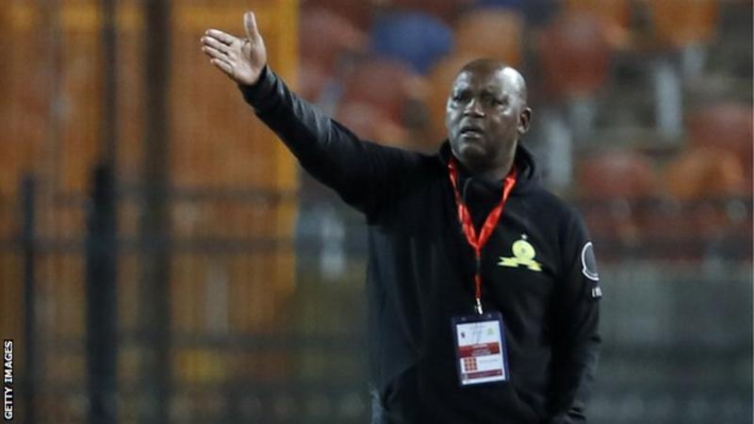 Pitso Mosimane has proven himself a ground beaker in South African football and now he looks to do exactly the same overseas.

In the last few weeks he wrote himself into the history books as he led Mamelodi Sundowns to win the South African league title for a fifth time in seven years.

He now has the chance to blaze a trail for black African coaches who have, hitherto, found few opportunities at the continent’s top clubs.

The former Bafana Bafana boss takes over at Al Ahly, the continent’s most successful club and long-time standard bearer for African football, in a sensational break of tradition by the Egyptian giants.

Clubs across the Arabic-speaking north of Africa have dominated the continent’s two annual club competitions for decades but have almost exclusively drawn their coaches from local ranks, Europe or South America.

But now the 56-year-old from Soweto,has a chance to fly the flag for fellow African coaches and break down previous barriers and dispel prejudices.

Mosimane had little left to prove domestically as Sundowns swept the board in South African league and cup competitions and therefore, it was no great surprise when he quit his on Wednesday.

His decision came despite the fact that he had only recently signed a four-year contract extension with Sundowns.

Mosimane has been hired by the Egyptians not just on the back of his domestic success but rather on the reputation he has built from winning the African Champions League in 2016.

Then last year he led his to a humiliating thrashing of Al Ahly in the quarter-finals of the same competition.

The one-sided 5-0 thumping was not only one of the greatest days for South African football, but the heaviest defeat suffered in almost 80 years by the Cairo giants.

That loss is something they have obviously not forgotten, particularly the elegance of play that Sundowns displayed that April day.

Mosimane is a great fan of playing pretty football but as the years have passed also become much more pragmatic, realising results are ultimately key to success and that how the points are won does not always matter.

“My ideas on how to play the game came from watching Louis van Gaal and his Ajax Amsterdam team win the Champions League in the 90s,” he has said about his football philosophy.

“I was playing in Europe in those days and I watched the way they played.

“My coach in Greece, Nikos Alefantso, who was a top coach, adored the ‘total football’ of Rinus Michels and the Dutch.

“He was the only coach in Greece who could play that way. That is all he talked about all the time, ‘Rinus Michel, Rinus Michels’.

“I learnt that philosophy from him and then I liked the way Van Gaal played. I said, ‘this is the way’. I learnt about all of those big coaches.

“I was lucky. A boy from Soweto who got to see the transformation of the game in Europe and to able to take some learnings from it.”

Mosimane will be expected to make Ahly not only win but also do so in dominant fashion.

He is taking a major risk in going to Egypt where coaches are rarely given time to settle in, in what is a ‘swim or sink’ attitude.

But he has always had a sense of adventure and told the BBC recently of his desire to make his way internationally.

He has past overseas experience as a player (Mosimane was capped by South Africa in 1993 as a striker) in Greece and later in Belgium, where his lower league club Rita Berlaar gave him a first chance at coaching

“I was assistant coach for the under-11s! The coach was just one of the supporters and there were times when he didn’t pitch.” he remembered.

“I had an interest and because we trained mornings and afternoons, my evenings were free and I asked, ‘can I help there?’

“They said, ‘yes, please help with the under-11s because their coach has a job that sometimes means he is not here’.

“The guy very quickly dumped the team with me! Although he took the kids to their games on the weekends because I was playing.

“But in the week I was coaching. It was hectic. I was a bit all over the place, but I liked it. I felt there was something there.”

When he went back to South Africa to finish off his playing days in the late 80s, he couldn’t get into the Sundowns teams and so was asked to work with the reserve team.

He coached and played there and even drove the mini bus that picked players up at their homes to take them to training.

He then went to SuperSport United, where he started their academy and later worked as assistant to coach Bruce Grobbelaar, the former Liverpool and Zimbabwe goalkeeper.

When Grobbelaar was fired before the halfway mark of the season, Mosimane took over and catapulted the club to runners-up in the league in 2002.

At SuperSport he won several cups before becoming in 2006 the assistant to Carlos Alberto Parreira, ahead of South Africa’s hosting of the World Cup in2010, after which he became national team coach himself.

But that ended in 2012 in much embarrassment as South Africa miscalculated the points they needed to qualify for the Africa Cup of Nations finals and instead of playing for a win in their last group game against Sierra leone, they mistakenly settle for a draw.

Thinking they had qualified only to discover they did not read the rules about head-to-head result taking preference over goal difference.

It was a massive embarrassment for Mosimane, and a subject he remains prickly on.

But when Sundowns needed a coach at the end of 2012, Mosimane was an obvious replacement and has not looked back since.

DISCLAIMER: The Views, Comments, Opinions, Contributions and Statements made by Readers and Contributors on this platform do not necessarily represent the views or policy of Multimedia Group Limited.
Tags:
Al Ahly
Egypt
Pitso Mosimane
South Africa