Planting for Food and Jobs was my idea – Mahama 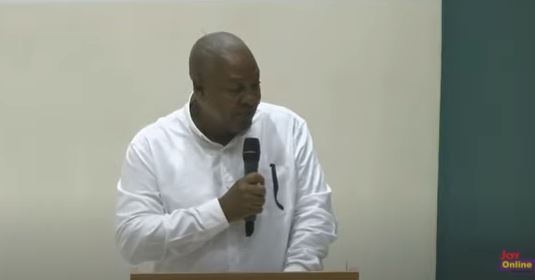 The policy, which was initiated in 2017, forms part of measures to ensure food security in the country.

According to him, he started the programme and his opponents, the NPP, came in and changed the name to PFJ and are taking credit for it.

Speaking at Dormaa in the Bono Region on Wednesday during his ‘Thank You’ tour, Mr Mahama said specifically that “before this government came in, we had an arrangement with Canada. They were giving us funding for agriculture because they had realised that it was the sector creating more jobs.”

“When they came into office, they named it PFJ. It was originally a programme that we were working on. They just came and continued it,” he said.

JoyNews/AdomNews · Planting for Food & Jobs was my idea – Mahama

He then said the Planting for Food and Jobs initiative has failed and that there is going to be food shortage in the country next year.

“Planting for Food and Jobs has failed. There will be famine in Ghana next year. The Canadian funding has been exhausted and we need to find alternative funding to sustain the programme but there is no money at the Ministry of Finance.

“Prices for food crops are going up astronomically,” adding “one of my siblings is a farmer. He is telling me this year there is no fertiliser. He had to buy his own fertiliser and a bag of fertiliser is expensive now. He normally cultivates 300 acres of maize but this year he had to reduce it to 80 acres. It shows that there is going to be hunger because the PFJ has failed,” he said.